Only the Dead Survive! 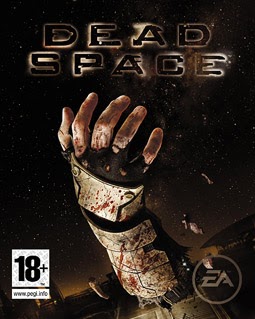 I meant to get this posted yesterday, but I suffered from laziness. After playing through Mass Effect 2, Dragon Age: Origins, Mass Effect, Dragon Age 2 and Dragon Age: Origins-Awakening (in that order), I was looking around for another thrilling gaming experience.
Dead Space is a survival-horror, third-person shooter video game from 2008, a sequel was released this year. The player takes on the role of an engineer named Isaac Clarke, who battles a virus-like infestation which turns humans into grotesque monsters called "necromorphs", on board an interstellar mining ship named the USG Ishimura. Trivia: The lead character is named after science fiction writers Isaac Asimov and Arthur C. Clarke.
The intensity of this game is really over the top and unnerving throughout. You constantly hear scurrying sounds and peculiar noises as you make your way through the bowels of the Ishimura, and believe me, you will jump out of your skin often as the necromorph attacks occur. The high levels of gore and violence in the game all play out in stunning high definition, in particular the tactic of "strategic dismemberment" is noteworthy. The player must cut off limbs or sections of the necromorphs in order to defeat them. For example, shooting a certain type of necromorph in the head will have little effect, and it will continue attacking the player until all of its limbs are removed. Depending on how they are wounded, certain necromorphs can adopt new stances and tactics, even sprouting new limbs or giving birth to new enemies in the process.

In keeping with Isaac's profession as an engineer rather than a soldier, the weapons of Dead Space are mostly improvised from mining tools like a plasma cutter, a rotary saw, a hydrazine torch used as a flamethrower, a high powered energy beam called the contact beam, and a force cannon emitting powerful shock waves. For traditionalists, a military-grade automatic rifle is also available. All of the weapons feature a secondary-fire mode; the plasma cutter can be rotated 90 degrees for an optimal angle for more effective dismemberment of vertical limbs (such as legs on a bipedal humanoid). The player must scavenge for ammunition and other items, which are found throughout the ship or dropped by necromorphs when killed. Automated stores found throughout the ship can be accessed to buy and sell items, or store them for later use. Also the player can use work benches and spend "power nodes" to upgrade Isaac's suit and weapons.

Dead Space also features vacuum and zero gravity environments on board the Ishimura, and Isaac must navigate through them using his pressurized suit and magnetic boots. He will eventually suffocate in a vacuum or a toxic environment as his suit can only contain a limited amount of air, so the player is forced to proceed quickly in these situations. Isaac can also jump from platform to platform while in weightless environments. Some levels even lead out onto the surface of the ship's hull, where the player must watch out for floating debris that could cause Isaac to lose his footing.

You will discover that on Aegis VII, the planet that the USG Ishimura is orbiting, a deep space mining crew pulled an ancient artifact called "The Marker" from the surface, which began to affect everyone in the colony. That isn't the only danger either. Government conspiracy and cult-like mindsets also contributed to the horrors found by Isaac Clarke, as he searches for his missing girlfriend. 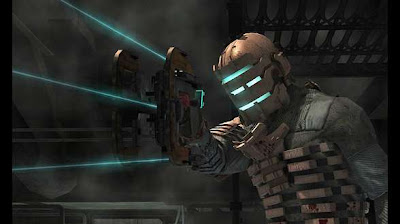 I have to admit that I'm working my way through this one - slowly - and during broad daylight. Laughable, sure, but trust me on this. Dead Space will scare the living shit out of you, and you'll enjoy the heck out of the experience.
Posted by Chuck Wells at 9:35 AM