CrossGen Comics was founded by Florida-based entrepreneur Mark Alessi, who sought to create a comic book universe that was uniquely varied but also connected by a common theme. The company debuted in 2000 with CrossGenesis, a sneak-peak of the universe, worlds and characters of CrossGen’s flagship titles that were released six months later. Their publications covered a variety of genres with characters inhabiting a single shared universe known as the Sigilverse. Before any comics were written, Mark Alessi and Gina M. Villa (head of creative departments), wrote a history of the Sigilverse along with a team of writers composed of Barbara Kesel, Mark Waid and Ron Marz. 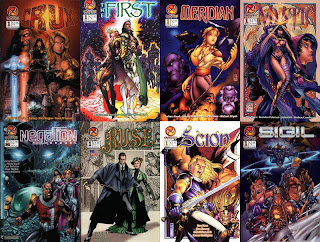 The protagonists of this first wave of CrossGen comics (Sigil a military science fiction space opera; Mystic a magical fantasy fiction; Scion a King Arthur-type adventure series; and the folklore-esque Meridian) were linked in commonality by the “sigil” that each character had received. It was a branding on their body, a marking that granted them unusual powers. The Sigil and the story of the Sigil-Bearers was a prominent aspect of the ongoing Sigilverse narrative.

Over the next three years, CrossGen released other titles: Crux, Sojourn, Ruse, and a key title Negation were released in 2001. The following year Route 666, Way of the Rat, and The Path were introduced. By 2003, numerous titles meant to expand the Sigilverse in a build-up to a crossover event called Negation War, were published that would address the growing issue of who created the Sigil-bearers. Although most CrossGen titles shared common elements, such as a Sigil, the presence of a Mentor and a member of the god-like First, their titles rarely crossed over with each other. The one planned company-event Negation War; was never concluded.

That year CrossGen Entertainment formed 11 wholly owned subsidiary companies, which represented its broad-based entertainment products and offerings. These companies were intended to act independently of CGE, functioning as interior business units while all working towards overall company goals. They published creator-owned material and became a frontrunner of Internet comic book subscriptions during this phase, but serious financial troubles quickly came to light. A scandal over free-lance creator payments exposed systemic cash flow problems, sales were affected, and creative staff began abandoning the company (including co-founder Gina Villa, artist Brandon Peterson, and writer Ron Marz). Their infrastructure collapsed after bookstore chains Borders and Barnes & Noble discontinued stocking CrossGen's collections and returned huge numbers of unsold books for credit/refund, more than wiping out their optimistically low reserves against such returns. CrossGen which had only operated from 1998 to 2004, filed for bankruptcy and ceased publishing, leaving titles such as Sojourn, Negation War, Brath and many others cancelled mid-story. 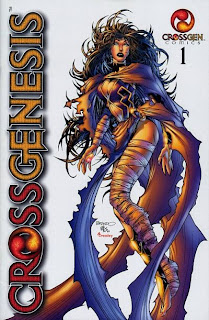