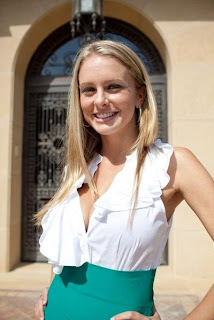 Twenty-six-year-old Shanna McLaughlin, perhaps better known to many as Playboy Playmate of the Month (July 2010), was arrested at Orlando International Airport this week and charged with carrying a firearm in a place prohibited by law.
Police were contacted after a .45 caliber revolver loaded with six hollow-point bullets, was found in her luggage. McLaughlin claimed that the weapon belonged to a boyfriend, but she also told the TSA stormtrooper that she has a concealed weapons permit, which he then verified.


Let me pause for a brief segue: The phrase "right of the people to keep and bear Arms" was first used in the United States Bill of Rights (and became law as the Second Amendment to the Constitution of the United States). While there is no federal law specifically addressing the issuance of concealed carry permits, 49 states have passed laws allowing citizens to carry certain concealed firearms in public, either without a permit or after obtaining a permit from state or local law enforcement.
The blonde bombshell has been charged with a crime, after what appears to have been an oversight and although she is currently free on bail, I'm wondering why a better solution couldn't have been reached. Why not simply impound the weapon? Does anyone in this country care about the increasing loss of our freedoms, not to mention the 4th Amendment right to be secure in your person, house, papers and effects, against unreasonable search and seizure, which is not supposed to be violated? This poor girl was disarmed, by goons employed by THE government (no longer OUR government) and left defenseless. It's a wonder the twisted shits didn't strip search her too. Maybe they didn't notice how hot she is? I'm inducting her into the Catacombs as this weeks official "gal" Friday pick, and hoping that she will consider taking refuge here, when they start asking us for our papers on neighborhood street corners, too. 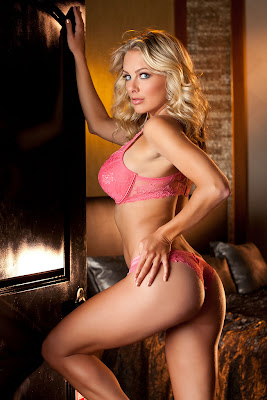 She may have a permit to carry a gun, but that doesn't mean she can carry it (loaded!) on a plane. I like my individual liberties as much as the next guy but if you need to bring your gun on vacation, check it in with your luggage.

The articles about this incident clearly state that the weapon was found in her LUGGAGE. She claims that she didn't realize that she was "packing" and that the item actually belonged to her boyfriend. I would guess that a Playmate travels quite a bit for promotional purposes, if nothing else, and that such a gaffe could easily have happened. All that I'm saying - since you lack focus - is that barring an extensive criminal record that would lead authorities to question the veracity of her word; and given the fact that she was legally granted a concealed carry permit, why arrest her?

The TSA did its job and detected the item. No reason to allow it on the plane, so confiscate it until arrangements can be made to have the gun picked up or forwarded in another manner. Why arrest her?

That's all that I'm saying, unless you feel that she is a threat simply for owning a hand gun. Why arrest her?

This quid-pro-quo is why I increasingly agree with the sentiment that opinions are like assholes. Everybody has one, but American hubris dictates that some tool always gravitates to the devil's advocate position - just for the sake of argument. Reason has no bearing anymore, much less "informed" thinking before opening ones mouth.

No I don't think this woman should be put in prison, but I don't care that she's inconvenienced. I think she's really careless to bring a loaded gun in her luggage without realizing it. I don't want loaded handguns on a plane I'm on even if they're with the luggage. I was taught gun safety and actually retain some of that they taught me. Bringing a gun full of hollow-points onto a plane is just an amazingly stupid thing to do so it's hard to sympathize too much with her. She's exactly the sort of person that shouldn't have a concealed weapons permit.

If having that opinion makes me a villain to you then so be it. I'd like to think reasonable people can disagree about the enforcement of gun control laws. I do appreciate your pictures of pretty girls on Fridays and scans most other days though.

No, you're not a villain to me. If the response that I made to your original comment rankled you, please understand that I tend to proselytize more often with folks who don't back up their words with their actual names. Like I do!

Doing so affords me an opportunity to address more of the "broader" aspects of any given dialogue.

Mr. Anonymous, I will say that before I picked Shanna for last weeks "Gal" Friday (for the reason that I specified), I read reports about the incident from a number of sources and thus far, you are the only one to mention that she "may" have changed her story on the handgun somewhat.

However, you do cite your local paper for that variation, and so I'll err on the side of caution and stand by my posts argument. Wanna be reasonable after all, right?