Gold Key Comics was created in 1962, when Western stopped packaging content for branding and distribution by its business partner, Dell Comics and switched to in-house publishing. Although Gold Key retained the majority of the licenses properties that Dell had previously offered, the new imprint hoping to make their comics more like traditional children's books, initially eliminated panel line-borders and had word and thought balloons that were rectangular rather than oval, giving the titles a cleaner, more modern look. This effort lasted about a year before they reverted to using standard inked panel borders and oval balloons. They also experimented with new formats, including black-and-white hardcover’s containing reprints and tabloid-sized books containing new material; evidently aimed at the book and department stores, in the manner of their popular Little Golden Books. Beginning in 1967, Gold Key packaged selected issues of their comics under the banner title Top Comics which were sold in plastic bags of five at gas stations and other locations, although the comics were often removed from the bags by the sellers and sold individually with price stickers attached to the covers. A striking difference between Gold Key and other publishers (aping yet another former Dell practice) was to publish most of their mystery, jungle, science-fiction, adventure and similar series with full-color painted covers rather than the standard line artwork. 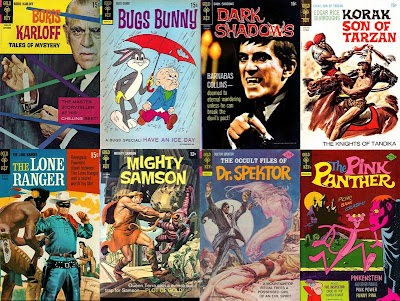 Gold Key’s licensed properties and original series maintained decent sales numbers throughout the 1960s, thanks largely to its titles based upon popular TV series of the day, as well as numerous titles based upon both Walt Disney Studios and Warner Bros. animated characters. It was also the first company to publish comic books based upon Star Trek. The streak didn’t last forever, and they lost several properties, including the King Features characters Popeye, Flash Gordon, The Phantom, and the Hanna-Barbera characters to Charlton, and the Star Trek license was awarded to Marvel Comics in 1979. Trivia: Three of Gold Key's original characters: Magnus, Robot Fighter; Doctor Solar, Man of the Atom and Turok, Son of Stone, helped launch Valiant Comics in the 1990's.

As the comics industry experienced a downswing in the 1970s, Gold Key was among the hardest hit. Its editorial policies had not kept pace with changing times and an erosion of its base among children, with more households now owning television sets for watching cartoons and other types of programming didn’t help. In this period their licensed titles featured mostly reprinted material. Although Gold Key books maintained a presence on spinner racks at drug stores & supermarkets; many of the same comics were being simultaneously distributed under the Whitman logo, and they were also taking large numbers of DC titles for redistribution. Declining sales finally forced Western to cease newsstand distribution in 1981 and the "Gold Key" logo was discontinued. All efforts to reinvent themselves ultimately proved unsuccessful and by 1984 Western was out of the comic book business. 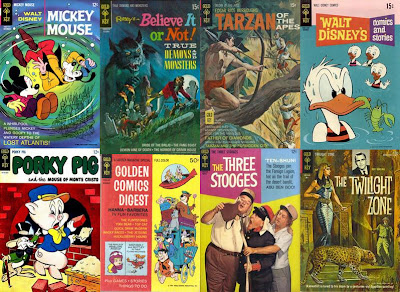 IIRC, the King Features characters were published under a short-lived King Comics imprint before finally ending up at Charlton, who used leftover King material before commissioning their own material bu the likes of Pat Boyette and Don Newton.

I love those Gold Key books. While never as spectacular as the Marvel or DC books, they always had solid storytelling and excellent artwork. And one of the big plusses is that the stories always had a beginning, middle and end. They didn't drag out for an interminable number of issues like the stuff being done today. You didn't have to concern yourself with continuity. If you missed an issue, it was okay. And generally the writers like Gaylord DuBois, Paul S. Newman, Mark Evanier, Del Connell could pack more into a single 24 page story than most of today's writers can in 6 issues. When you read a story you were satisfied that you'd had a pretty full adventure. When can you recall that happening with many of today's comics?