From the Dust Bin: Miss Masque 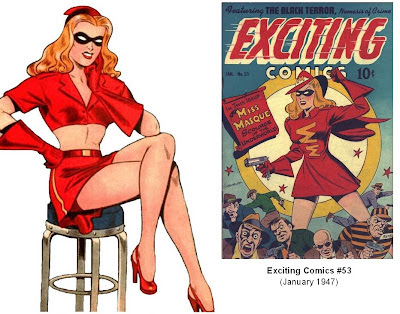 Diana Adams was a young socialite who decided to fight crime and injustice. She adopted the secret identity of "Miss Masque", but without any actual super powers, she had to rely on her wits and a pair of revolvers. Miss Masque's original costume was a red short-skirted dress, with accompanying hat, gloves and cape; plus a small domino mask. She later changed her ensemble to shorten her sleeves and bare her midriff, along with a different style head cap.
Miss Masque made her first appearance in Exciting Comics #51 (Sept. 1946). She also popped up in companion titles Black Terror, Fighting Yank and America's Best Comics (including her final golden age appearance, America's Best Comics #31 (July 1949).
Despite having a much shorter run in Better/Standard/Nedor comics than her sister hero, The Woman In Red (now credited as the first costumed female super hero), Miss Masque is more widely remembered because The Woman In Red never appeared on any major covers [other than a small head shot on the first two issues of America's Best Comics]. Alex Schomburg & Frank Frazetta provided art duties on some of Miss Masque's memorable cover appearances and Ralph Mayo pencilled several of her interior splash pages.
Miss Masque has remained in the public eye over the years as part of Bill Black's AC Comics, Wildstorm/DC Comics "America's Best Comics" imprint [created by Alan Moore] and she is currently featured in several other comics publishers stable such as Dynamite Entertainment's Project: Superpowers.
Read some of her golden age adventures over at the Nedor-A-Day blog in my links section or click here and enjoy.
Posted by Chuck Wells at 9:42 AM

Thanks for the plug, I'll try to upload a story of her in her sexier outfit soon.