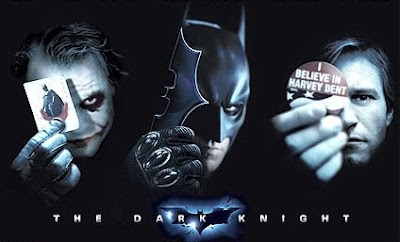 Actually, this is less a review than an affirmation that all of the positive word of mouth generated by "The Dark Knight" is right on the money. This is one of the best films that you will see this year. In the wake of some really good superhero movies that have already hit theaters in 2008 (Iron Man, Incredible Hulk), Christopher Nolan's epic Batman Begins sequel goes several notches further, setting the bar even higher than anyone probably thought possible.
Yes, it is that good! (Heath Ledger. Serves. Jack Nicholson.) And Ledger truly does deserve a posthumous Oscar nomination. If he doesn't score one, then we only have utterly stupid people in Hollywierd to blame.
I agree with my brother, in that I can't ever watch the earlier Keaton/Kilmer/Clooney versions of Batman anymore. There wouldn't be any point to it. Christian Bale IS Batman. And he appears to not be an egocentric actor to boot. I can't imagine any of the other Bat-performers not insisting that the final closing moments of the film not show their faces. The movie ends with an effective sequence in which the Dark Knight is on the run, his back to us the entire time. And it is perfectly appropriate for the story that was told. High Marks!
Minus Heath Ledgers participation in this film, everyone would have been saying the same thing about Aaron Eckhart, or Christian Bale, or Gary Oldman. And we must also acknowledge the incredible supporting performances of Michael Caine, Morgan Freeman and Maggie Gyllenhaal. Every single actor in this film brought their "A-game", and that in and of itself is one of the most awesome aspects of this stellar film. For two and a half hours you are simply riveted to the screen, not knowing what will happen next.
"Marvels vs Kingdom Come" to quote my brother yet again, Marvel Entertainment has made a couple of great comic book movies this year, but Warner Brothers/DC Comics has instead made one of the best motion pictures of all time. It really changes the nature of the game for every other comic book movie that follows in its wake.
[If Watchmen lives up to the trailer which ran in front of The Dark Knight, then DC will hit hard with the "ultimate" one-two punch].
Posted by Chuck Wells at 7:13 AM