Shonen Jump(ing off the deep end with Stan Lee) 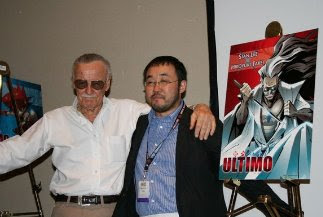 Nope!
I'm not a fan of manga. I like some of the anime stuff, but showing hentai imagery would be inappropriate to lots of folks,and its not like I see much of that anyway. Cutie Honey, anyone?
My brother began picking up Shonen Jump a year ago, looking for kicks that regular comics weren't giving him, and that's okay with me (even though I do tease him about it). Today he called to let me know that Stan Lee (yes; that guy) was launching a manga story called "Ultimo" [Quick, somebody warn Marvel that Mr. Stan Lee is liberating the name of an old Iron Man foe].
"Ultimo by Stan Lee and Hiroyuki Takei - September 2009 issue preview Announced with great fanfare at the New York Comic-Con in April, Chapter 0 of Ultimo will make its stateside debut in the September issue, complete with all the color pages that the Japanese readers of Jump SQ. got to enjoy. Two robots, one good and one evil are created by a Dr. Dunstan in feudal Japan -- only to awaken years later to wage battle over a modern Japanese city. "
Yeah! Like that's an original idea. Demonstrating once again, that minus a Kirby, Ditko or other available silver age collaborator, Stan can't really do much more than play spin the wheel. Hey, wasn't Marvel's villain, Ultimo a big robot, too?
Didn't everyone learn this lesson with his lackluster "Stan Lee Creates DC" stuff? Stripperella?
They must not be paying Stan enough to appear in all of those movie cameos. And I thought that was a sweet gig for the old guy.
Posted by Chuck Wells at 2:32 PM