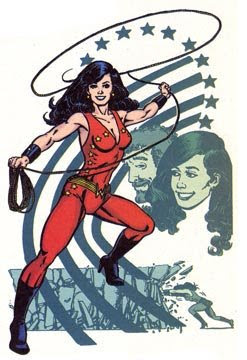 Donna Troy made her first appearance in The Brave and the Bold #60 (July 1965), joining with Robin, Kid flash and Aqualad to form the original Teen Titans. But then things get a little sketchy, you see, the relationship between this Wonder Girl and the previously seen younger version of Wonder Woman was attributed to a mistake, because the writer didn't know that "Wonder Girl" was merely a younger Diana (ala Superboy=Superman).
The mystery of Wonder Girl's origin wasn't revealed until four years after her introduction, when readers were told that she had been orphaned by a fire which had killed her parents. Saved by Wonder Woman, she had been taken to Paradise Island, where she was given Amazon powers by the mysterious Purple Ray. She later adopted the alias of Donna Troy, but beginning in the 1980's, her origin has grown increasingly complex, having spun off in more directions than a wayward kudzu plant.
There was the whole Titans of Myth thing, the post-Crisis magical duplicate known as Dark Angel thing, and now she's become a cosmic oddity who is a conglomeration of all the multiversal Donna's. Sheesh!
Plus, she's been known as Donna Troy, Wonder Girl, Troia, and she's been a Darkstar, and well, who the heck knows what?
So believe me when I tell you, that it is far better to remember her from her early days with the original Titans, and her awesome years under the aegis of Marv Wolfman and George Perez in New Teen Titans. Forget the rest of that pablum, no matter how many ways they spin her origin down the line, she'll always be Wonder Girl to me.
Posted by Chuck Wells at 1:41 PM