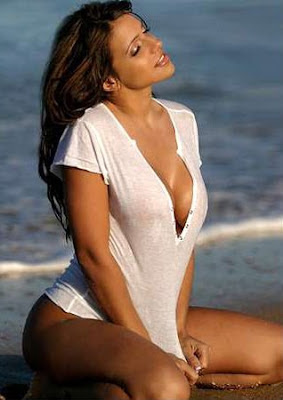 Vida Guerra was born in Havana, Cuba in 1974, but her family soon moved to the United States ending up in Perth Amboy, New Jersey. Growing up she participated in fashion shows and modeled swimwear, but her first national exposure came when she appeared in a lingerie spread for FHM magazine in December 2002.
To say that she has taken the pin-up world by storm would be an understatement, and Vida's photo shoots tended to reveal "just about" everything, without going the full Monty route until an incident involving personal cell phone screen captures leaked onto the Internet. Following that event, Ms. Guerra decided to accept an offer to pose for Playboy magazine so that the world could see what she really looked like in her birthday suit. The July 2006 issue of Hef's perennial favorite showed us all what the incredible Vida Guerra actually looked like naked.
I debated long and hard (yes; pun intended) about whether to show one of her nude shots, but a series of cold showers that resulted from this effort prevented me from being able to sit at the PC and do so. I settled on this lovely beach photo AND I am encouraging [NO; make that begging you guys to go check her out on the web]. By God, in all of his mercy, you will be glad that you did.
Vida is absolutely, smokin' hot (damn, another cold shower awaits).
Posted by Chuck Wells at 7:16 AM

You disgust me, you are what is wrong with men, you are a sick bastard.

Everything written in my old post was intended tongue in cheek, something easily cleaned by carefully scanning most of them. However it never ceases to amaze me how such a remark as your own assumes much about a stranger? You also chose not to weigh in on nubile young ladies doffing their clothes to entice the masses? I smell a hypocrite!