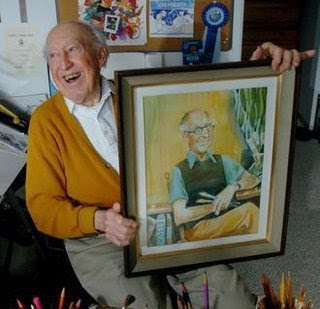 I just found out about this today, but golden age comic book artist Creig Flessel passed away on July 17, 2008 at the age of 96. He is most closely associated with National (now DC) Comics original version of the Sandman, but Flessel also created the Shining Knight and worked on many other features, including a run on Superboy which lasted into the late 1950's.

Flessel then left comics and worked for many years in the advertising business, in addition to drawing a syndicated strip about a young minister, David Crane.

Condolences go out to his family, friends and fans.
Posted by Chuck Wells at 1:47 PM