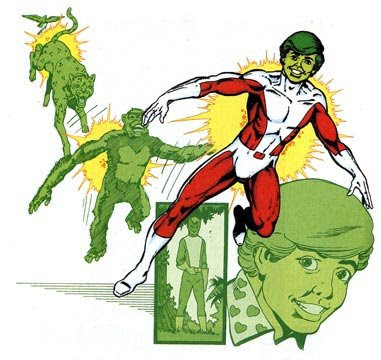 This Catacombs featurette could almost be labeled a "1980's Flashback", but I'm not quite ready to cede over the 1970's stuff yet. There's still quite a bit left to play with in that old ballpark. Instead, I'll just be taking a fond look back at the popular characters from the 1980 revival of the classic Teen Titans by acclaimed creators Marv Wolfman and George Perez starting with Garfield Logan, who was originally created by Arnold Drake and Bob Brown and who made his first appearance as "Beast Boy" in Doom Patrol #99 (Nov. 1965).
As a young boy, he contracted the rare disease called sakutia, which could only be cured by extracting a serum from an even rarer green monkey. Unfortunately, the serum had the unintended side effect of permanently changing his hair & skin green, and additionally Gar (as he was often called) was suddenly able to physically transform himself into any animal shape that he chose. After his parents were killed in a boating accident, Logan briefly fell under the sway of two criminals who used his abilities in their crimes, and ultimately he was placed in the custody of Nicholas Galtry, who plotted to kill Garfield for his inheritance. The Doom Patrol prevented this from occurring and Gar was adopted by two of the teams members, Rita Farr & Steve Dayton. Following the heroic sacrifice made by the other members of the Doom Patrol (to save the lives of fourteen villagers) in issue #121 of their series, Beast Boy became the sole surviving member (or so he thought) of the group, a fact that haunted him for many years.
Gar Logan temporarily became part of Titans West, before he was eventually recruited by Raven to become one of the founding members of the New Teen Titans (Nov. 1980). Gar adopted the codename of Changeling at this time, and he soon became very close friends with fellow member, Cyborg.
Changeling uses his strong sense of humor to disguise the pain of the many losses that he has experienced in his life, but this quirk was particularly compounded when Changeling fell deeply in love with a late-recruited New Titans member, Terra. In actuality, Tara Markov had actually infiltrated the team under the auspices of the villain, Deathstroke the Terminator, in order to betray them. Her death during the Titans battle with the two foes, was heartrending for the young hero.
Changeling's ability to morph into any animal that he has personally seen or viewed in an illustration takes only a second, and he is capable of rapidly changing form with little or no effort expended. His powers enable him to completely alter his body mass, including the shapes of animals far larger and heavier than himself (such as an elephant, or a hippopotamus), or smaller animals (such as mice and insects). His powers also enable him to radically alter his bodily structure and take on the forms of animals without limbs, such as snakes. While maintaining any animal-form, Changeling gains all of the physical abilities and characteristics of the animal. Also while in animal form, he retains his human intellect, memories, and the ability to speak. No matter what form he takes, his skin, hair, and eyes constantly remain green, making most of his animal forms easy to distinguish from real animals of that species.
Posted by Chuck Wells at 10:38 AM