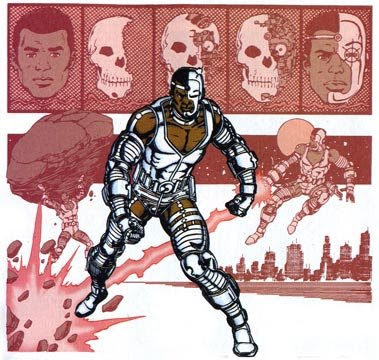 For the second part of my “Remember the Titans” featurette, let’s take a look at Victor Stone who was created by writer Marv Wolfman and artist George Pérez, and who made his first appearance as Cyborg in DC Comics Presents #26 (October 1980).
Victor Stone’s parents were scientists who had subjected their son to various intelligence enhancement techniques throughout his young life. Eventually, Victor grew to resent these treatments and he pursued athletics, which his parents disapproved of, and he then fell into lawlessness through an unfortunate acquaintance. Victor was also talked into participating in a street gang fight in which he was wounded, for the most part however, Victor still had a largely normal life under the circumstances, but he refused to follow his best friend's grandiose plans of racially-motivated terrorism.

One day while he was visiting his parents at S.T.A.R. Labs, an experiment in dimensional travel went horribly wrong when a massive gelatinous monster was released through a portal and then it killed Victor's mother. The creature also turned on Victor and severely mutilated him before his father managed to force the creature back into the portal.
To save his son, Victor's father replaced his damaged limbs with experimental prosthetics of his own design, but the equipment could not be worn inconspicuously, and Victor was horrified to see much of his body, including part of his face, replaced with sheer metallic limbs and implants.
Although Victor wanted to die at this shock, he eventually adjusted enough through his extensive physical therapy to control his implants with suitable skill. Upon release from medical care, his life was seriously inconvenienced with the fearful reactions of the public who saw his implants; even his girlfriend rejected him. Additionally, he was disqualified from participation in athletics not only for his implants but for his poor grades which were further exacerbated by his long convalescence. It was at this time that his old friend attempted to use Victor's inner turmoil to manipulate him into attempting a terrorist attack on the United Nations, Victor discovered a new purpose after he equipped his prosthetics with weapons attachments and stopped his friend in a pitched battle on top of United Nations Headquarters.

He joined the New Teen Titans, initially for the benefit of a support group of kindred spirits and outsiders and he has remained with that group ever since. Victor found other new friends who saw past his disfigurements to his own nobility, such as a group of children who were adjusting to their own prosthetics and idolized Victor with his fancy parts and exciting adventures as well as their beautiful teacher, Sarah Simms, who has often assisted him. Cyborg and Sarah have a deep relationship that is likened by some fans as Cyborg's one true love, although writer Marv Wolfman insists it is just a deep, caring friendship.