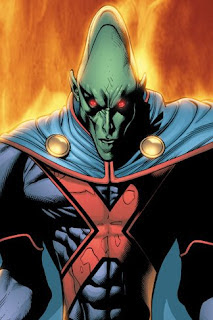 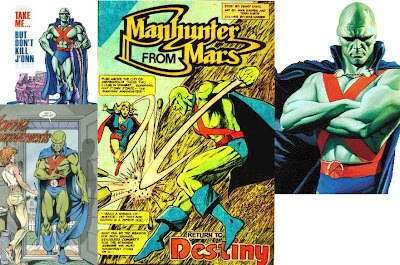 The first superhero of the Silver Age is dead.
The Martian Manhunter was murdered in the first issue of Final Crisis #1, at the hands of Libra & the Human Flame, but it was writer Peter Tomasi who really polished off the mighty green member of the JLA. Tomasi who professes a love for the character in an interview posted over at Newsarama, goes on to add that despite J'Onn being one of the mainstays of the DC Universe with "a ton of stories to explore", he was singled out by Dan Didio and Eddie Berganza to put the big guy out to pasture. [Note: This is the same Dan DiDio who is barely holding onto his job at DC Comics in the wake of plunging sales].
Tomasi & friends believe that the Martian Manhunter is a character that's taken for granted, so maybe once the dust settles, it'll hit readers how much they "like" the character and wish he would have had some better opportunities to shine in the DCU.
[ASIDE: Is Tomasi talking about the Gumby-ed up version (Above; right) of the Martian Manhunter that sorta resembles Marvel Comics Impossible Man-on-steroids who's been parading around the DCU since their last year-long, weekly crossover series ended? One has to wonder. I don't think anybody "liked" that atrocity. It's no wonder they've offed that ridiculous travesty. Look at the collage above for a glimpse at the "real" J'Onn J'Onzz. You know, the one they swept underneath the carpet in "52".]
The rest of Tomasi's interview is the usual yadda, yadda, yadda, I don't wanna say too much, blah, blah, blah bullshit (which is really bad for ya') kinda stuff. So if spinning around in a vortex suits your lifestyle troll the web for Newsarama. I'm not gonna link you there, just in case some of your folks want to live a longer, happier life.
Let's all hope that Superman's graveside prayer for a "resurrection" of the Martian Manhunter proves to be prescient - - - as long as the hero that eventually returns is the original one who first launched the Silver Age at National Comics.
Posted by Chuck Wells at 1:49 PM

(sigh) DiDio's job is NOT in jeopardy. This was un unfounded speculative internet rumor...DC recently extended his contract (which would've ended in a couple months) sooo...get used to him

Actually, Mr. Anonymous, this discussion raged throughout all three days of the recent Heroes Convention (where Mr. DiDio was in attendance) and the following weeks WizardWorld show also.

My statement didn't reveal any personal value judgement about whether or not I felt that Dan deserved to keep his job or not, and there is no denying that DC's slaes are down. As you've pointed out his contract was up for renewal soon, anyway, so it is only natural that rumors may have been floating in & around the industry.

This was a heck of a lot more than an internet speculation. Go eat some comfort food,fella!