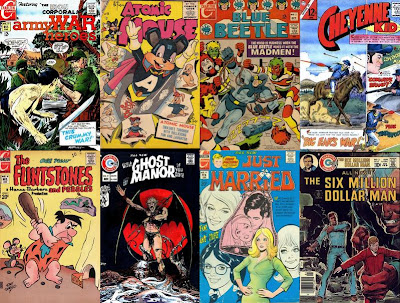 ﻿
﻿Charlton Comics enjoyed a four decade run from 1946 to 1985, during which they published a wide variety of genres, including crime, science fiction, western, horror, war and romance comics, as well as funny animal and superhero titles. The company was well-known for its low budget practices, often using unpublished material acquired from defunct companies and also for paying comics creators the lowest rates in the industry. Charlton Comics was the last American comics company to raise their pricing from 10 cents to 12 cents in mid-1962. Charlton also had its very own distribution company (Capital Distribution) which was located at its Derby, Connecticut headquarters. This was unique among comic book companies in that it controlled all areas of publishing, from editorial to printing to distribution; rather than working with outside printers and distributors as did most other publishers.

Trivia: The company was originally founded by John Santangelo, Sr. and Ed Levy in 1940 as T.W.O. Charles Company, named after their two sons, both named Charles, and ultimately became Charlton Publications in 1945.

The company's most noteworthy period was during the Silver Age where its science fiction anthology title Space Adventures introduced Captain Atom, by Joe Gill and the soon-to-be-legendary co-creator Spider-Man, Steve Ditko. Charlton also introduced Son of Vulcan, in answer to Marvels Thor, in Mysteries of Unexplored Worlds #46 (May 1965). With the Vietnam War underway, Charlton offered notable titles including Fightin' Air Force, Fightin' Army, Fightin' Marines and Fightin' Navy; the "Attack" line of Army Attack and Submarine Attack; Battlefield Action; D-Day, U.S. Air Force Comics, and War Heroes. Charlton also threw itself into the resurgent horror genre during this period, with such titles as Ghostly Tales, The Many Ghosts of Doctor Graves and Ghost Manor.

In 1966, having grown disenchanted with Marvel and his Spider-Man collaborator, writer-editor Stan Lee, Steve Ditko returned. Having the hugely popular Ditko back, prompted Charlton editor Dick Giordano to introduce the company's "Action Hero" line the following year, with characters including Captain Atom, The Question, The Peacemaker, Judomaster, Peter Cannon: Thunderbolt and Ditko's new "Ted Kord" version of the Blue Beetle. The company developed a reputation as a place for new talent to break into comics; examples included Jim Aparo, Dennis O'Neil and Sam Grainger. Yet by 1967, Charlton's Action Hero titles had been cancelled, and licensed properties became staples, particularly cartoon characters such as The Flintstones, The Jetsons, Top Cat and Bullwinkle and Rocky.
By the 1980s, Charlton was in decline. The comic book industry was in a sales slump, struggling to reinvent a profitable distribution and retail system. Charlton's licensed titles lapsed, its aging presses were deteriorating towards uselessness, and the company did not have the resources to replace them.

Charlton Comics, home of Judomaster and Sarge Steel, the man with the steel fist! Their romance comics were brilliant, too.
Charlton will forever be etched in my mind as the comics with the worst printing registration so everything looked blurry and off-kilter, like a 3-D picture without glasses.