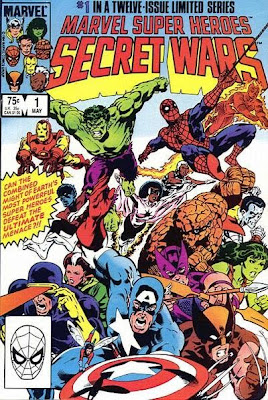 Marvel Super Heroes Secret Wars was a 12 issue limited series published by Marvel Comics from May 1984 to April 1985. The series was written by Jim Shooter and featured art by Mike Zeck and Bob Layton. The series was launched as a crossover involving a dozen or so of Marvels major titles and characters.
A cosmic being known as the Beyonder observed the universe and became fascinated by the presence of superheroes on Earth and their potential. The Beyonder chose a group comprised of both superheroes and supervillains and teleported them against their will to "Battleworld", a planet he had created in a distant galaxy. The world was also stocked with various alien weapons and technology. The Beyonder then declared: "I am from beyond! Slay your enemies and all that you desire shall be yours! Nothing you dream of is impossible for me to accomplish!"
The heroes included the Avengers, members of the Fantastic Four and solo heroes including the Hulk, Spider-Man and the X-Men.
The villains included the Absorbing Man, Doctor Doom, Doctor Octopus, the Enchantress, Kang the Conqueror, Klaw, the Lizard, the Molecule Man, Ultron and the Wrecking Crew. The cosmic entity Galactus appeared as a non-aligned entity.
The heroes and villains then engaged in several tense skirmishes. There were several significant developments during the course of the series: villains Titania and Volcana were created; the second Spider-Woman, Julia Carpenter was introduced; Spider-Man found and began wearing his black costume for the first time (initially unaware that the costume was actually an alien symbiote); Doctor Doom temporarily stole a portion of the Beyonder's power; having fallen in love with the alien healer Zsaji (who later sacrificed her life on Battleworld to save the heroes), the X-Men's Colossus ended his romantic relationship with a heartbroken Kitty Pryde; and the Thing remained behind on Battleworld and explored that part of the galaxy for a year with heroine She-Hulk temporarily joining the Fantastic Four as his replacement.
Marvel Super Heroes Secret Wars proved so successful that a sequel, Secret Wars II began a year later.
Posted by Chuck Wells at 10:25 AM

One can't question this series' huge sales figures or its significance to continuity of the time but I stand by my belief that this was one of the WORST written and plotted maxi-series of them all!

Booksteve, you are probably right in your estimation that this counts among the "worst", but as Marvel Super Heroes Secret Wars was originally designed as a launching pad series for marketing toys with Marvel in discussion with Mattel, what did you expect.

In fact, it was the Mattel company who suggested that the word "secret" be included in the series title, since kids responded well to the word.