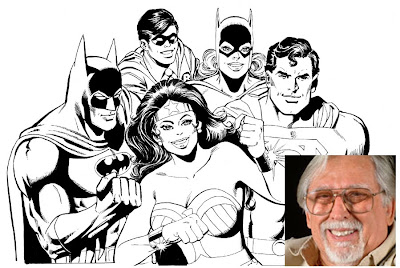 The reaper has been particularly busy this month with the loss of notable television actors Peter Graves, Fess Parker and Robert Culp already. Now comes the sad news that the month of March has claimed veteran comics artist & editor Dick Giordano who passed away this morning at the age of 77.
Giordano began his career as a freelance artist and worked his way up to editor-in-chief during the 1950's & 1960's at Charlton Comics, where he also revamped the company's superheroes in their "Action Hero" line. He later moved to DC Comics as an editor in 1967. As an artist, Giordano is best-known as an inker, where his realistic brushwork and eye for detail helped define the Bronze Age style. His inking is particularly associated with the pencils of Neal Adams, for their influential run in the late 1960s and early 1970s on the titles Batman and Green Lantern/Green Arrow. Giordano also inked the large-format, landmark DC/Marvel Comics intercompany crossover Superman vs. the Amazing Spider-Man (1976), over the pencils of Spider-man artist Ross Andru. Giordano also inked Adams on the one-shot Superman vs. Muhammad Ali in 1978. Throughout the late Seventies and Eighties, Andru and Giordano were DC's cover artists of choice, providing cover artwork for almost every title in the DC line at that time.
Giordano was a frequent guest of the Heroes Convention in Charlotte, NC and I am very glad to have had the opportunity to see him on several occasions and that I finally took the plunge to acquire a nice Batman sketch from him last year. The Catacombs expresses its sincerest condolences to his family, friends and many fans.
Posted by Chuck Wells at 7:38 PM