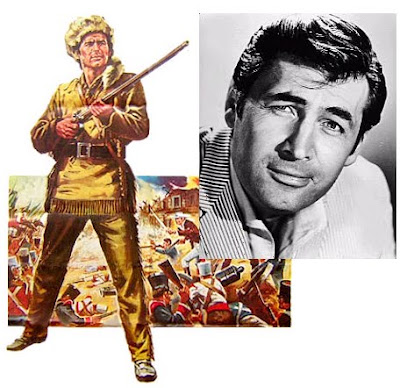 Actor Fess Parker, a baby boomer idol in the 1950's & 1960's for his portrayals of legendary frontiersmen Davy Crockett and Daniel Boone, died today from natural causes at the age of 85.
Parker had retired in 1970 after Daniel Boone went off the air and later become a major California winemaker and real estate developer. His motion picture debut was in Springfield Rifle in 1952. His other films include No Room for the Groom, The Kid From Left Field, Them!, The Great Locomotive Chase, Westward Ho, the Wagons!, Old Yeller and The Light in the Forest.
The 6-foot, 6-inch Parker was quickly embraced by youngsters as the man in the coonskin cap following the debut of "Davy Crockett" in 1954 on the popular Disneyland television series. Boomers gripped by the Crockett craze scooped up Davy lunch boxes, toy rifles ("Old Betsy"), buckskin shirts and his trademark fur caps. "The Ballad of Davy Crockett" which began "Born on a mountaintop in Tennessee..." became a No. 1 hit for singer Bill Hayes.
The Catacombs expresses it condolences to his family, friends and fans.
Posted by Chuck Wells at 6:24 PM

You'll be missed. I may just have to pull out my Davey Crockett Disney Treasury and do a marathon this weekend.