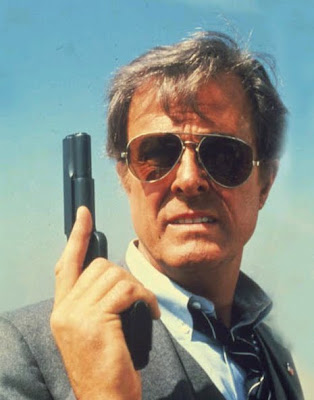 Mere days after loading my "From the Dust Bin: Spectre (TV)" feature, I have to say that it is very weird to have to add this item.
Actor Robert Culp died today at the age of 79 in Los Angeles as a result of a fall. Culp was the popular star of several television series, including the Spectre pilot for Gene Roddenberry. Along with Bill Cosby, Culp starred as Kelly Robinson on the espionage series, I Spy (1965-1968) and in 1981 he starred in The Greatest American Hero, as tough-as-nails FBI Agent Bill Maxwell.
His genre credits comprised only a portion of his hundreds of performances, but Culp appeared on The Outer Limits, Target: The Corruptors, The Man From U.N.C.L.E., The Name of the Game and he almost won the lead role on Space: 1999.
The Catacombs expresses its sincerest condolences to his family, friends and fans. Strange indeed, in the wake of two other iconic television stars passing (Peter Graves & Fess Parker). They always go in threes!
Posted by Chuck Wells at 9:22 PM

Never heard that about SPACE 1999. I'm watching his 2 NAME OF THE GAME episodes in tribute this evening (even as I type this).

I am so stunned and sad about this. I always wanted to be Kelly Robinson - so cool, so sure of himself, yet so basically generous and kind. For those that were not there, you cannot really grasp how cool Culp was in I-Spy - all sunglasses and smiles. Never frightened, never off-balance - always smart. What a huge loss for guys of my generation. God rest his soul. -- Mykal

I heard about Peter Graves, but not about Culp or Parker.

Booksteve, during negotiations with creator/producer Gerry Anderson, Culp pushed for duties not only as an actor but as a writer & producer for the proposed Space: 1999 series. With the pair at odds over these issues, Anderson just gave the part instead to Martin Landau.