From the Dust Bin: Spectre (TV) 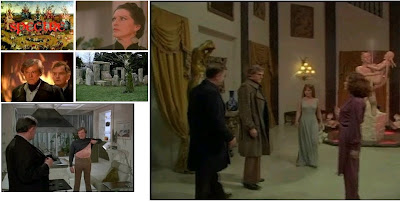 Last year I ran a series of posts on the late Gene Roddenberry's aborted 1970's science-fiction television pilots. If you will recall, post-Star Trek, Roddenberry produced and/or wrote Genesis II, Planet Earth, Strange New World and The Questor Tapes in an effort to launch another ongoing TV series. For one reason or another, all of these efforts failed to take off, but one final attempt by the "Great Bird of the Galaxy" was made to initiate a show and this time it was set within the world of the occult detective sub-genre. If you ever have an opportunity to see this terrific obscure film, it will be well worth your time.
Spectre may have been the best of Gene Roddenberry's busted television pilots. By abandoning his efforts to repeat the success of Star Trek, Spectre became the exception to his earlier cycle of cliche ridden variations on sci-fi themes. Interestingly, Spectre's lead characters William Sebastian and Dr. "Ham" Hamilton were originally meant to be played as Sherlock Holmes and Dr. Watson. Despite this being changed before going to air, one of the strengths of Spectre is how effectively the action immediately picks up at the start and then continues unabated until the film's conclusion. The exceptional teleplay was written by Roddenberry and his former Trek partner, Samuel A. Peeples.
Renowned criminologist and occult investigator William Sebastian (Robert Culp) has been cursed on one of his adventures, leaving him in constant need of medical attention. Sebastian recruits his old friend Dr. Hamilton (Gig Young) to aid him in his current case, investigating strange happenings in England involving a mysterious Satanic cult and the demon Asmodeus. Anitra Cyon (Ann Bell), the sister of prominent British businessman Sir Geoffrey Cyon (James Villiers), has summoned the famous pair in order to determine if her older brother is dabbling in the black arts. In turn, Sir Geoffrey claims that she is mentally unfit. As Sebastian and Dr. Hamilton travel to the Cyon estate to investigate the matter, they are repeatedly attacked by dark forces. Complicating the issue is Sebastian's debilitating heart condition that was induced by his own early experimentation's with the black arts. The cast is rounded out by recognizable character actors John Hurt as Mitri Cyon, Majel Barrett as Lilith (Sebastian's housekeeper & a practicing witch who cures "Ham" of his alcoholism through a spell of aversion therapy) and Gordon Jackson as Inspector Cabell.
The story is a really entertaining supernatural thriller in the classic Hammer Films mode from director Clive Donner. Of note is that after its rejection by American television, an extended version of Spectre was released in the United Kingdom as a theatrical film with additional footage that included nudity during its black mass finale. This additional footage built upon scenes shot within the Cyon Estate where numerous buxom women were utilized as maids or sexual appendages of Sir Geoffrey's hedonistic lifestyle.
The cinematography was also above par for a standard 1970's telefilm and it's too bad that this never went to series. There was much to like about Spectre, and it should have been better received. This was also the last significant role for Gig Young before his tragic death the following year.
I highly recommend this film to anyone who is willing to track it down and gladly thank Catacombs visitor Jeff McFadden for sending me a copy to watch and review.
Posted by Chuck Wells at 2:23 PM

You're the only person I know of that remembers SPECTRE! Finally I know that it wasn't a dream!

I remember taping (audio-this was before home video) Spectre as a kid and listening to it over and over. I really was a great show and I was disappointed when it wasn't picked up as a series.

Although it would look rather dated today, if memory serves, it could easily be updated and still stand up well.

I suppose because I lived through a lot of the pop culture & genre stuff from the 1960's until now, these old shows generally don't look "dated" to me.

They are of their time and fine in that respect. I would rather see studios tackle new material than endlessly remake older properties in order to "update" or "contemporize" them to allow the last couple of generations of citizens that have gronw comfortable wallowing in stupidity.

That's not a slam against you PhilO, and I'm not singling you out here. My comment is directed more to producers and other current media regimes that stripmine older stuff for the name brand effect and then homogenize it for the videogame, soundbyte contingent among us.

I don't take that as a slam, Chuck.

I agree that I would rather see new material rather than bastardizations of old, well-loved material. I also agree that movies from the past are part of their time and should be viewed as such.

On the other hand, we will never get more Roddenberry shows, written and produced by Gene, himself. Because of this and the fact that Spectre is not available on DVD currently, I would rather see an update done lovingly (and as literally as possible) than see Spectre disappear completely from the mass consciousness.

Of course, if the studio would release the DVD again, preferably the 90 minute version, I would be happy.

That said, I would hate to see Spectre updated simply because it is a Roddenberry show, without care or concern for the original vision.

In fact, the most "dated" part I can recall (aside from the wide collars and 70's hair) is the ending. The demon reminded me too much of the Gorn from Trek, just another guy in a lizard suit. I am sure that if Roddenberry had the budget and the tech he would have done that differently.

But, gods, how I would love to watch it again.

I was a bit surprised that Spectre just seemed to disappear. I agree with PhilO that it could almost certainly be successfully remounted now.

Har, har. Keep in mind though, that once his butterfly wings start flapping, the chronal displacement would likely wreak havoc within the space-time continuum in which the Catacombs exists.

However if the end result of such rebooting of the timestream somehow stranded Britain's "Combat Barbie" somewhere within handy reach of yours truly, then I am fine with the impending celestial damage.