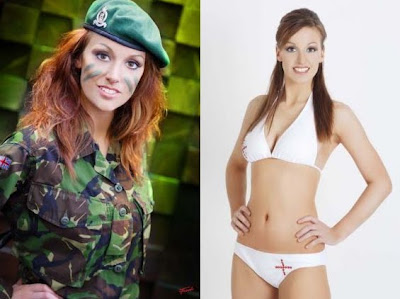 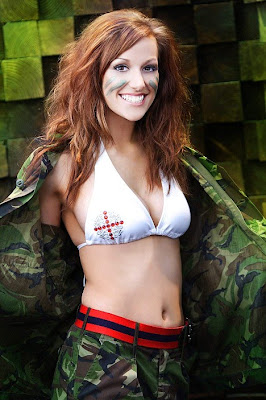 Lance Corporal Katrina Hodge of the British Royal Anglian Regiment was challenged by her older brother to join the Army, so Hodge signed up at the tender age of 17. After her basic training she reported for duty wearing kitten heels, false eyelashes and carrying her clothes in a pink suitcase, earning her the nickname "Combat Barbie".

She later competed in the 2009 Miss England pageant and was named first runner-up to the winner, Rachel Christie, who was the first black woman to ever win the Miss England crown.
"Combat Barbie" is known for possessing tough fighting skills as a soldier. She was posted to Iraq for seven months and while there she received notable commendation for disarming and detaining a suspected rebel fighter with her bare hands.
Following Rachel Christie's recent resignation as Miss England, following a public bar brawl debacle, Cpl. Hodge was named as her replacement. Released from active duty in order to fulfil her obligations as Miss England, Hodge has quickly garnered the interests of fans worldwide. As a Air Force veteran myself, let me express my deepest appreciation for our lovely British ally.
Now if the good Corporal would back away from her efforts to eliminate the swimsuit aspect of the competition the Catacombs would be happy to issue its own salute. Aw, who am I kidding?
I've been giving her an earnest one-gun salute for several days now.
Posted by Chuck Wells at 12:15 PM

Oh, to be taken prisoner and submitted to severe interrogation. She could do her worst; I would only give Name, Rank, and Serial Number. Hours and hours of torture - I would take it like a man! Jeez, this is so full of cheap joke potential; I'll stop now and give others a chance. – Mykal