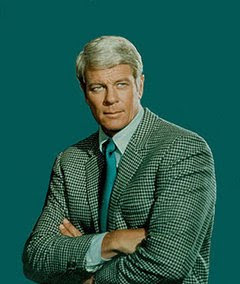 Although he had been featured in several earlier recurring television roles (Fury, Whiplash, Court Martial), it was as Jim Phelps, the leader of the elite Impossible Missions Force in the iconic CBS TV series Mission: Impossible that actor Peter Graves will be best remembered. Mr. Graves passed away yesterday, just a few days shy of his 84th birthday, from an apparent heart attack.
In 1967, Peter Graves was recruited by Desilu Studios to replace Steven Hill as the lead actor on Mission: Impossible. He played Jim Phelps, the sometimes gruff leader of the Impossible Missions Force or IMF, for the remaining six seasons of the series. Graves was awarded a Golden Globe Award in 1971 for his role in the series. In 1988, a Hollywood writers' strike resulted in a new Mission: Impossible series being commissioned for television with Graves as the only original cast member to return as a regular (although others made guest appearances). The series was filmed in Australia and lasted for two seasons, ending in 1990.
Graves appeared in more than seventy films, TV series and TV movies, including a memorable role in the 1980 spoof, Airplane! He also hosted the documentary series Biography on A&E during the 1990's, for which he won a Primetime Emmy Award for outstanding informational series in 1997.
The Catacombs extends heartfelt condolences to his family, friends and legion of worldwide fans.
Posted by Chuck Wells at 1:13 PM

Your assignment, Jim, should you chose to accept it, is to rest in peace. If you, or any of IMF force are captured or killed, the secretary will disavow any knowledge of your action.

Well, in this case I feel comfortable speaking on behalf of the secretary and will make an acceptation. I gratefully acknowledge Peter Grave's wonderful career and say God Speed, Mr. Phelps. I think MI was one of the best series ever put on the tube. The essence of cold war, TV cool. -- Mykal