Things That I Hate About the X-Men (Part I)! 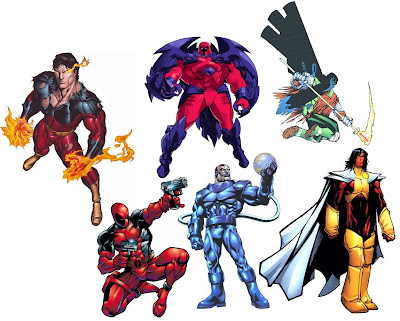 I admit to being bored today, and the solicitation for the David Finch variant cover for an upcoming issue of New Mutants over at Newsarama prompted me to think about all of the things that have "alienated" me from an old favorite for the past twenty years. Man, I miss the All-New, All-Different X-Men!

Apocalypse (En Sabah Nur) was born nearly five thousand years ago on the outskirts of Egypt and he has spent millennia roaming the planet, encouraging civilizations to worship him as a god, and testing their strength by manipulating them into fighting wars of conquest.
Exodus (Bennet du Paris) was a Frenchman who fought in the Crusades, then set out to explore a legend of the lost pharaoh in Egypt known as Apocalypse, who helped unleash Bennet's own mutant powers. Apocalypse christened him "Exodus" and made him his servant.
Onslaught was created when Prof. Charles Xavier, after an intense battle with his archenemy, Magneto, reached into his enemy's mind to "shut it off," however a portion of Magneto's mind similarly entered Professor X's. This essence remained dormant and later combined with the Professor's repressed "dark side" to create a separate personality that called itself "Onslaught."
Vulcan (Gabriel Summers) was the unborn child of Christopher and Katherine Summers (parents of Cyclops and Havok). Katherine Summers was pregnant when the Summers were abducted by Emperor D'Ken of the Shi'ar. Young Gabriel was artificially aged into adolescence inside a Shi'ar incubator after being removed from his mother's dead body to be used as a slave. Sent to Earth to serve Davan Shakari, the Emperor's hand on Earth, Gabriel escaped and was found by Moira MacTaggart with no memory of who he was or where he came from. She took him as her ward, and instructed him in the use of his nascent powers. He chose the code name of Vulcan from a book on Roman mythology.
X-Cutioner (Carl Denti) was an agent working for the FBI who discovered case files loaded with information on many mutants of the United States as well as a stockpile of pilfered weapons and technology. Believing it necessary to take extreme measures against mutant perpetrators, Denti fashioned the X-cutioner identity using the collected technologies and information for hunting down and killing mutant criminals.
Deadpool (Wade Wilson) possesses a superhuman healing factor derived from that of the mutant Wolverine, that allows him to regenerate damaged or destroyed areas of his cellular structure at a rate far greater than that of an ordinary human. He can regrow severed limbs or vital organs but the speed at which this healing factor works varies in direct proportion to the severity of the damage Deadpool suffers. This healing factor also affords Deadpool a virtual immunity to poisons and most drugs, as well as an enhanced resistance to diseases and an extended life span.
Posted by Chuck Wells at 1:40 PM