"The First Avenger:Captain America" Has Been Cast! 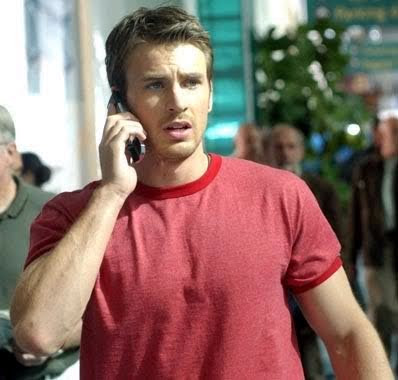 Ain't It Cool News is reporting that actor Chris Evans has accepted the role of Steve Rogers, Living Legend of WWII aka Captain America.
If so, then I am comforted by the selection of Evans. He was really terrific in the thriller Cellular, the science-fiction actioner Sunshine and he was easily the best thing about Marvels recent Fantastic Four and it's sequel, Fantastic Four: Rise of the Silver Surfer as wiseacre hero Johnny Storm, The Human Torch (not too hard considering how crummy those two movies ended up being overall).
He has also stretched the genre envelope by appearing last year in Push, and upcoming comic book adaptations Scott Pilgrim vs. the World and The Losers.
For me, Evans handily stood out among the narrowing field of performers that were being considered for the part. Hopefully, everyone will have the same reaction now that Cap has finally been chosen and with shooting slated to start fairly soon for the film to be in theaters next summer.
Posted by Chuck Wells at 4:31 PM

With some rare exceptions comic book movies have been disappointing to me. I'll reserve judgment on this Captain America until I hear more, and anything is better than Reb Brown in that awful '79 television movie.