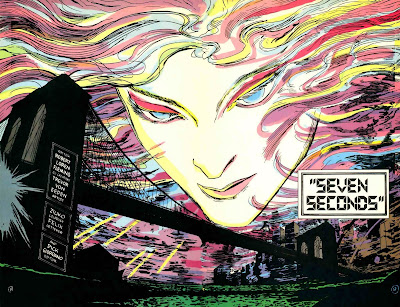 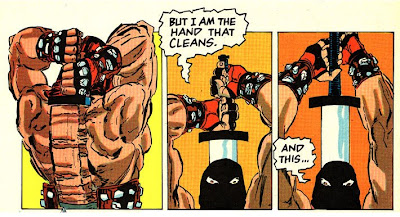 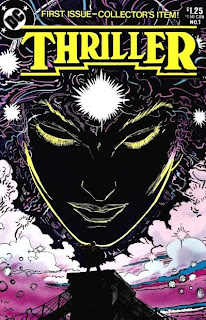 Thriller was a short-lived series published by DC Comics beginning in November, 1983. The series, created by writer Robert Loren Fleming and artist Trevor Von Eeden, was sold only through the direct market. Highly regarded as innovative in terms of narrative and design, the tagline for the series was, "She has 7 seconds to save the world ".
"She" was protagonist Angie Thriller (pictured; top), the leader of a team of adventurers called the Seven Seconds, who were based in the New York City of a subjective fifty years in the future. Angeline Marietta Salvotini Thriller had the power to become one with any inanimate object, and thus control it, after her scientist husband, Edward's experiments with alien DNA resulted in his merging bodies with his wife, and resulted in her attaining godlike powers. They could not co-exist in the same place at the same time. She could cause her face to appear on an object or even in the sky. The only living beings she could actually merge with were her twin brother Tony, and the artificially created Beaker Parish. Angeline could also see visions of possible future events.
The "7 seconds" referred to a team of operatives who assisted her in various conflicts including Tony Salvotini, a former mercenary soldier and member of the U.S. Marines' rapid Deployment Force. After mistakenly killing an innocent man, "Salvo" vowed to never again shoot to kill. He would instead only wound his targets; Beaker Parish, was the test tube experiment of two renegade college science students which resulted in a 7-foot-tall red-headed priest with unexplained psychic abilities; Crackerjack, a young Honduran pick-pocket, who was the ward of Edward Thriller, who served as an all around "gopher" for the team; Daniel Grove, a photojournalist who filmed his brother's execution by the villain Scabbard (pictured; above). Grove was saved from Scabbard by Angie, and invited to join the Seven Seconds; Data (Freddie Martin) was the son of the President of the United States. As the team's communications and information expert, he worked from an enhanced computer system built into his limo, one which Data was physically interfaced with and could never leave; Proxy (Robert Furillo, Tony's best friend) was an actor, who suffered a disfiguring accident while freebasing drugs. Proxy used a synthetic spray-on skin to create new disguises for the team's more covert requirements; and White Satin (Janet Valentine) was Tony's girlfriend. She had extra-normal abilities and could disrupt a person's physiology and mental state with a simple touch. She was also a jet pilot, hence the nickname "Jet", coined by Salvo. The Seven Seconds usually investigated cases involving unusual menaces, some bordering on the supernatural. During one of their most notable missions, they were able to thwart an attempt to bring about a nuclear holocaust and destroy all life on Earth.
After the first seven & eight issues respectively, both Fleming and Von Eeden left due to frustration over editorial indifference and general lack of communication between the co-creators. The series ran for four more issues under the hands of a different creative team.
Posted by Chuck Wells at 9:44 PM