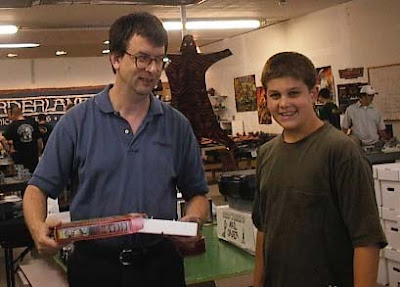 Borderlands is a privately owned comic book shop located in Greenville, SC. A simple Google search estimates that the store has a current annual revenue of less than $500,000 and employs a staff of approximately 1 to 4, and that sounds about right. I’ve been a regular customer of Stan Reed (pictured above with a young customer) for almost two decades. Stan was originally the right hand man of Shelton Drum, the owner of “Heroes Aren’t Hard To Find” in Charlotte, NC; Shelton is also the organizer of the annual Heroes Convention.
Apparently Stan has sold out lock, stock & barrel to another person in a whirlwind deal that happened without any preamble. I’m going to miss having Stan at the store, and I’m sure that he would have preferred I spent more money there. My purchases of new monthly comics have dwindled – for lack of a better word – over the past several years as the major publishers have gotten away from producing titles that appeal to me. Stan never made me feel less than appreciated, no matter how much I spent or how often I stopped by. During 2010, thanks to Stan, I managed to pick up quite a few of my bronze age keys for outstanding prices. He wasn’t the type to gouge someone beyond a fair price.
That is what I will miss most. Stan was a great person to deal and/or haggle with over comics. He wasn’t one of those dealers who make it their mission in life to screw you, just so they can cackle about how dumb you were to sell something to them for less than it would bring elsewhere. He was also knowledgeable about the same kind of stuff that I’ve enjoyed in this genre throughout my life. I should also mention that Stan was a huge proponent of gaming, and gaming was at least half of the stores livelihood. I’m sure those folks will miss him too!
I will probably continue to stop by from time-to-time, but the impact of Stan’s departure will certainly be felt. I wish him and his family the very best of luck.
Posted by Chuck Wells at 1:51 PM