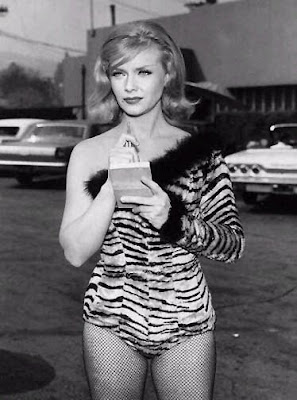 On Monday, the lovely Anne Francis, a stunning blond who shot to fame in the 1950s playing a variety of female siren characters, passed away from complications of cancer at her home in Santa Barbara at the age of 80.
So very strange that Ms. Francis follows Leslie Nielsen (who died last month) into the great beyond, of course the pair co-starred in the 1956 science-fiction classic "Forbidden Planet," a genre retelling of Shakespeare's play "The Tempest". Anne later portrayed a sexy detective in the 1960's television series "Honey West", for which she was nominated for an Emmy award. In "Honey West," (pictured; right) her character was like a female James Bond: sexy, stylish, and an expert of martial arts.
Her film resume includes Bad Day at Black Rock, Blackboard Jungle, The Satan Bug, More Dead Than Alive, Hook Line and Sinker and a massive & impressive list of appearances on numerous TV series from the 1950s until 2004.
The Catacombs extends its sincerest condolences to her family, friends and fans.
Posted by Chuck Wells at 8:39 PM

HONEY WEST is old Nick At Night fave of mine, and I loved her in the '80s when she starred as "Mamma Joe" in the early episodes of the unjustly forgotten S.J. Canell TV classic RIPTIDE.

Very classy presence in anything she did...

Oh my goodness, this hits me hard. Ms. Francis was one of the most sexy and beautiful (a combination rare as hen's teeth) women ever to roam God's green earth. My all time crush. I will forever regret not knowing her on a first-name basis. Every male should watch Forbidden Planet so that they may set a mark - a standard - for the hightest mark they might hope for.

I certainly agree with that sentiment, Mykal. In my "About Me" section, Forbidden Planet is listed as one of my favorite movies.

When I beat the Controllers & Harbinger in my very next Mass Effect 2 mission to end the game, I'm going to do so in Anne's name.

The younger folks who think that trailer trash like the Kardashians and Sooki are sexy, just don't have a clue. Ms. Francis and classic ladies like her, put those skanks to shame.