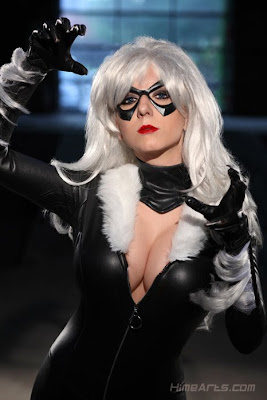 I've seen Riddle in various costumes attending several of the regional events in the Southeast. She is usually in attendance at the Heroes Convention in Charlotte, NC (plus other Heroes events) and at Dragoncon in Atlanta, GA. The range of costuming that she typically sports runs the gamut from recognizable superheroines to popular anime characters, and anything in between. She always looks awesome, too!
Late last year, I asked "Riddle" for permission to feature her in the Catacombs and I'm very glad that she has finally agreed to my request. If any of you guys out there are lucky enough to have a girlfriend like this young lady, well, I can only imagine how happy you must be to have a smoking hot "gal" don your favorite geek-centric guises for endless hours of fun & frolics.
Although Riddle admitted to a degree of trepidation in encapsulating herself in writing, here is a brief bio in her own words: "Riddle recently transplanted from her igloo in Canada. She had been costuming for over 10 years, but in the last 5 years it has developed into a career with the skills she has learned from her hobby. Riddle skill’s involve sculpting, mold making and casting, now her talents have led her to create more complex and dynamic costumes. Her work has garnered attention from her peers and she has won awards and received press in many magazines and websites. She works part time with Lab 604 and Plan B, doing sculpting, mold making and casting and also assists local comic artists with clerical duties. Her costumes have been shown in TV Guide, Game Informer, Hardcore gamer, Maxim and various Japanese cosplay magazines. Riddle was recently contacted to participate in a costume challenge in which she was part of a team that had to build an elaborate costume in 14 days. Big Sister, from 2K’s sequel Bioshock 2, which was featured on websites like College Humor, Geekologie, and Kotaku. She recently finished working on a feature film as a Special Makeup FX Technician."
Sounds good to me, Riddle. And you certainly don't seem the least bit boring. You definitely earned your spot in the Catacombs as this weeks "Gal" Friday pick. I look forward - as always - to seeing what you will be wearing next.
Posted by Chuck Wells at 12:14 PM

Ms. LeCotey will do any darn day of the week. What a fine, fine looking girl.

Note to Ms. LeCotey: Never, ever loose the glasses. They lend the perfect, wholesome touch.

I agree with both comments, Mykal!

She actually looks better and prettier in plain clothes than in costume. :)

Riddle does such awesome work
I saw her at the Oct 2009 Big Apple Comic Con
She rocks!

Guys, you're preaching to the choir here, but - again - I agree with the sentiments that you both express.

Riddle is the "whole" package.