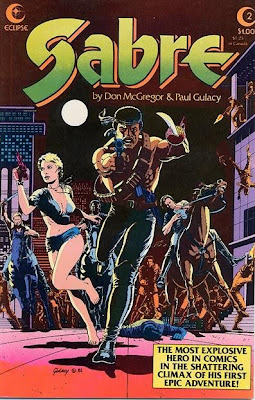 Sabre #2 (Oct. 1982) was written by creator Don McGregor and drawn by artist Paul Gulacy. This issue reprints the second part of the original “Sabre" graphic album of 1978 – published for the first time in full color - by Eclipse Comics.

Set in a post-apocalyptic future, “Slow Fade of an Endangered Species” has Sabre awakening in the Synchronization Center of the Overseers lair, where he undergoes brainwashing attempts to subvert his own identity and thus make him an effective drone to serve the greater needs of this society. Various snippets of his past life are obliterated via the nefarious machines, and once Sabre appears to have been broken by the ordeal, the Overseer orders his female aide, Misty, to test him. A nearby monitor shows mercenary, Blackstar Blood’s men beginning their planned rape of Sabre’s lover, Melissa Siren. Blackstar Blood, who believed his captured foe to be an honorable opponent, is disgusted by this display and stalks out of the room.

The Overseer, grown confident that Sabre’s non-response to this stimulus indicates compliance, frees his prisoner from his shackles. However Sabre has barely managed to resist his conditioning and immediately lashes back at his captors. Unbeknownst to everyone, Melissa has already slain the worst pair of her defilers and successfully talked the remaining mercenary, Willoughby, into freeing her.

As the battle between Sabre and the Overseer continues, Misty draws a deadly bead on the unaware Sabre, intending to kill him. Before she can pull the trigger, she is shot to death by the returning Blackstar Blood, in payback for Sabre’s earlier injury at the hands of his men. Blood now makes a play for Sabre himself, pleased that his foe has escaped the Overseer (and grateful for a chance to confront him again).

Melissa Siren has released all of the imprisoned Settlers and during the tumult that ensues, she races to assist Sabre. Blackstar fires a blast that violently destroys a closing monorail car, throwing Melissa from her stallion and also distracting the Overseer enough for Sabre to blow his brains out. Sabre and Melissa are reunited, and since Blood is suddenly unemployed, their conflict is ended as well.

A brief epilogue, set two months later, shows Sabre leaving the pregnant Melissa behind even as the militias remaining forces are drawing close to the couples current location. This sets up elements that will continue into the following issues all new story material.

The Eclipse issues which reprinted the original graphic album in color, also featured many comic book firsts including a graphic childbirth and a kiss between gay men. The lead characters, Sabre and Melissa Siren, were a revolutionary pairing for comics back in 1978. He was a strong leading black male hero, and she was a blond white female. These days that would barely rate a ripple in the news media. The subsequent Sabre comic book series ran for fourteen issues, but with artists Billy Graham and Jose Ortiz, instead of Paul Gulacy.
Posted by Chuck Wells at 1:54 PM

I loved Sabre, I recently re-read it ( as a result of re-reading Panther's Rage ), and I love it, still. it's not perfect, not by a long shot, but it was a heartfelt attempt at kicking over the statues. Don McGregor rules.

McGregor apparently reworked some ideas that were originally intended for his run on Marvels Killraven series, so that peaked my interest, having never read an issue of Sabre before now.

I will likely track down the first Eclipse issue to complete the original album story, too.

I read the original Sabre graphic novel and the Eclipse color issues. I was a fan of McGregor's run on Killraven too, so the teaming of them of Sabre seemed like a perfect fit. McGregor's style always seemed a little too preachy to me and somewhat overmelodramitic, but it suited both of these groundbreaking SF series!