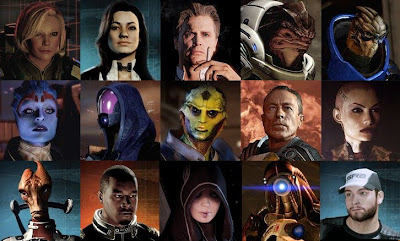 That's how long it took me to beat Mass Effect 2 on Xbox 360.
It was also one of the most intense and entertaining thirty hours that I have had in quite a while. I tip my hat to Bioware, Xbox and all the creative talent behind this incredible gaming experience.
I'm really not the gaming type, and typically only played video games on rare occasions, since I basically suck out loud and generally fail to get anywhere on the damn things. But. This science fiction-action game was an inventive, truly immersive experience from start to finish. I chose to customize my Commander Shepard as a Colonist blond female, Sentinel class, and War Hero. Although I researched the game continuously as I played it - not looking for cheats mind you - there were still many aspects of the overall Mass Effect universe, that I either missed out on, didn't understand or begin to fully appreciate until my next two playthroughs. I bought the game as a Christmas present for my son and ended up being the one to get completely "hooked" on it!
Yes. I've already played through two more times. Well, I'm on my third right now and still enjoying it just as much. Look, if you are interested in kicking it up a notch and haven't played this game - go Google it - and see if this would be something worth experiencing for yourself.
Mass Effect 2 is an event. My "readers digest" description for the uninitiated would be, think big budget CGI-sci-fi extravaganza crossed with The Dirty Dozen. Now tell me that sound bite doesn't at least make you a bit curious? I could go on and on about this whole thing, but I just picked up the original game and can't wait to pop it in. Gotta run!
The photos (above) are of my crew, left to right. Top row: Cmd. Shepard, Miranda Lawson, Illusive Man, Grunt, Garrus Vakarian. Middle row: Samara, Tali'Zorah, Thane Krios, Zaeed Massani, Jack. Bottom row: Mordin Solus, Jacob Taylor, Kasumi Goto, Legion, "Joker" Moreau. During the final "suicide mission" that I recruited these team members for, I succeeded at beating the Collectors, destroyed their base - after warping through the Omega 4 Relay - and only got one character killed (Legion). The decisions that I made in this game will have an impact on the sequel, Mass Effect 3, when it comes out in November. I made a save file to rollover into that game, and can't wait to see what the crew of the Normandy SR-2 will have to do next.
Posted by Chuck Wells at 8:36 PM