Return of the Originals: Battle for L.A. 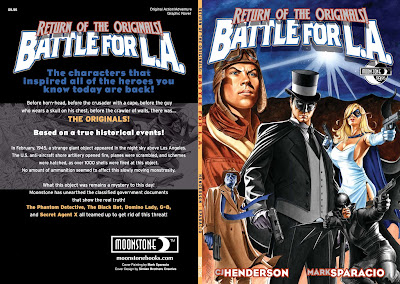 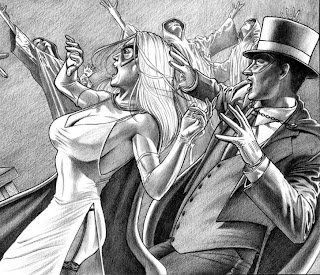 The nice folks over at Moonstone sent this information to me a few days ago and even more than anything else they've allowed me to promote on my little old blog, this book looks like something that is right up my alley. I've already ordered two copies and they are also going to release it in hardback next month....in color. If it turns out to be as much fun as it sounds, I may break with tradition and buy that one too.

Secret Agent X...Domino Lady...G-8...The Black Bat...The Phantom Detective. The characters who inspired all of the heroes of today have RETURNED and Moonstone Entertainment, Inc. brings them to YOU!

Moonstone Entertainment, Inc, known for breathing new life into classic characters does it once again with RETURN OF THE ORIGINALS: BATTLE FOR L.A.! This graphic novel, story by CJ Henderson and art by Mark Sparacio, relates a story based on a true historical event that has been classified...until now! A tale that brought the greatest heroes of the Pulp era together in a high action, fast paced attempt to save Los Angeles and the very world.

In Feb, 1945, an object (or objects) appeared in the night sky above Los Angeles. The US anti-aircraft artillery opened fire, and over 1000 shells were fired at this object(s), but to no avail, nothing was brought down. What this object was remained a mystery...until now! Moonstone has unearthed the classified government documents that show the real truth! Documents that reveal just what occurred over LA in 1945 and chronicles the exploits of the heroes that teamed up to eliminate this threat!

THE WORLD NEEDS REAL HEROES. IT'S TIME FOR...THE RETURN OF THE ORIGINALS: BATTLE FOR LA!!

I'll bet that G-8, well into middle-age, was feeling all those old injuries.

I got my copy last week. Haven't read it yet. It looks like fun but I'm a bit disappointed that it's an illustrated prose novel and not the graphic novel it's being promoted as. (I don't mind reading prose, but to expect one thing and receive another is frustrating.)

Penelopecat, I appreciate you confirming that for me. I had an inkling of an idea that was the going to be the case, but it's nice to know before the book shows up, that way even if I would have been disappointed - now I won't be.

My only concern, knowing that this is a prose volume with illustrations, is why they opted to release the black & white and color versions a month or so apart.