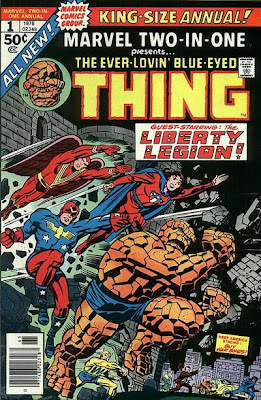 Marvel Two-In-One Annual #1 was released in 1976, shortly after Fantastic Four Annual #11 (Jun. 1976) which featured the first part of this continued storyline in which the Fantastic Four returned from the past with only half of a missing vibranium canister. While there the FF encountered the World War II team, The Invaders, comprised of Captain America & Bucky, the Sub-Mariner and the original Human Torch & Toro. The combined groups stopped the Nazis from utilizing the vibranium to advance their rocketry program.
However once back in the present, and while the rest of the team prepares for a celebration, The Thing (courtesy of the timely arrival of The Watcher) discovers that the Nazis may actually still be able to use the missing metal to ultimately win World War II. The Thing takes a second time trip (although solo now, he is the star of Two-In-One after all) back to 1942 where he meets up with another WWII super-team, The Liberty Legion, comprised of the Patriot, Miss America, the Whizzer, Red Raven, Jack Frost, the Blue Diamond and the Thin Man. Together they tackle Skyshark, Master Man and U-Man as Ben Grimm tries to find the stolen vibranium.
"Their Name is Legion!" is well written by Marvel Comics stalwart Roy Thomas and pencilled by the great Sal Buscema. Inking duties are provided on this oversize special by a trio of Marvel veterans including Sam Grainger (pages 1-35); John Tartaglione (pages 36-45); and George Roussos (pages 46-47). The overall effect is quite fun, with their styles meshing well on the art front.
There is an unexpected cameo by Jazzy John Romita, who Thomas wrote into the story as a kid in a few panels, apparently based on Romita's real life childhood experience delivering courier packages to doctors as a boy. Nice!
Of course with the two annuals having already crossed over, this story was so big (at the time) with sixteen heroes and assorted villains, that the story doesn't even end here. It's finally completed in Marvel Two-In-One #20. The Liberty Legion was a favorite of mine when they were introduced earlier in twin issues of Marvel Premiere, and with this storyline, other than a handful of guest spots over in The Invaders own title, this was pretty much their entire published adventures at Marvel during the bronze age.
If you missed this one on the first pass, pick it up if you get a chance. A nice copy can be had in decent grade for less than $10 bucks, and it is well worth it.
Posted by Chuck Wells at 10:03 AM

To me, this comic is part of what made the Bronze Age so magical! As Marvel didn't really use many of their Golden Age heroes during the Silver Age (as DC had done) it was the Roy Thomas helmmed Marvel that would revisit the Golden Age with Gusto and blow my mind with characters like the Thin Man and The Whizzer.

I would love to see a Marvel Projects styled mini-series with these guys, but you know, without the modern Downerisms that seem so popular now...