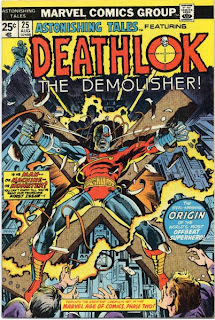 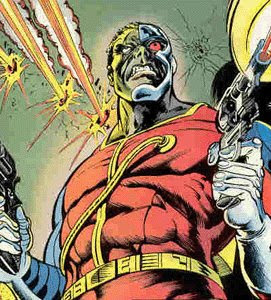 Colonel Luther Manning was a soldier from Detroit, Michigan who, after being horrifically injured, awakens physically tranformed into the experimental Deathlok-Cyborg in a post-apocalyptic future. There, Manning battles the evil corporate and military regimes that have taken over the United States, while simultaneously struggling not to lose his humanity. He encountered Spider-Man and Captain America in various time travel journeys, and eventually overthrew the megalomaniac who had taken over the country. Following a multi-issue run in Astonishing, Manning remained in his near-future alternate reality, searching for a purpose in life and unable to disconnect himself from the machine elements that were bonded to him.
Deathlok the Demolisher possesses super-human speed, strength and reflexes, an ability to repair bodily damage and due to his technological components he has the ability to track multiple objects, making him an effective killing machine.
Posted by Chuck Wells at 2:34 PM