From the Dust Bin: Supermouse 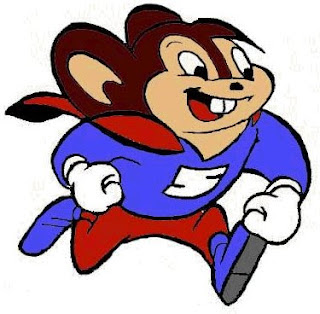 October 1942 proved to be an auspicious month for rodents, as two separate characters calling themselves "Supermouse" appeared, although Standard Comics version was first out of the pack. Paul Terry opted to change his mouse's moniker [after four animated shorts had already been produced] rather than promote someone else's character, so his newly named Mighty Mouse went on to cartoon glory.
Supermouse (aka The Big Cheese) was first introduced in Coo Coo Comics #1. Supermouse was created by noted cartoonist Kin Platt. Together these two equally appealing mice became the first two ongoing funny animal superheroes. Although they may have started under the same name, they were two entirely different characters.
Soupie (as he was often called) had a wife named Mabel and a nephew named Roscoe. His arch-enemy was Terrible Tom, a cat. He got his super powers by eating super cheese (which was made from the milk of a super cow); and quite a few stories, especially in the early days, revolved around others either depriving him of his stash or making use of it themselves.
Supermouse went on to become one of the most successful funny animal superheroes ever to come out of comic books. By the time that Coo Coo Comics fell by the wayside in the early 50's, Soupie had gotten his own self-titled comic where he continued until 1958. It ended only when the company itself (which had published as Standard, Better, Nedor and several others names over the years) finally folded. Now somewhat forgotten, Supermouse definitely earned a permanent place in comics history.
Posted by Chuck Wells at 8:00 AM