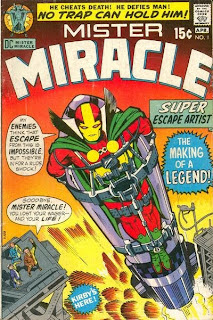 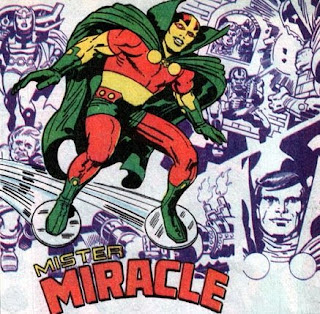 Scott Free is the son of Izaya (Highfather of the New Gods), ruler of New Genesis and his wife Avia. As part of a diplomatic accord aimed at preventing a destructive war against the planet Apokolips, Highfather agreed to exchange heirs with the galactic tyrant Darkseid; the exchange guaranteed that neither side would attack the other and so Scott swapped places with Darkseid's second born son Orion. Scott was raised in one of Granny Goodness' infamous "Terror Orphanages" without any knowledge of his own heritage. Scott eventually rebelled against the totalitarian ideology of Apokolips, and suffered bouts of self-loathing due to his "inability" to fit in. He was later influenced by Metron to imagine a future beyond Darkseid. Scott joined with a small band of pupils who were secretly tutored by the rebel Himon, a New Genesian living on Apokolips. This was where he met fellow pupil Big Barda, who would later become his wife.
Eventually, Scott Free escaped Apokolips and fled to Earth. This escape, long anticipated and planned for by Darkseid, nullified the peace accord between Darkseid and Highfather and gave Darkseid the excuse he needed to revive the war with New Genesis. On Earth, Scott became the protégé of a circus escape artist, Thaddeus Brown, whose stage name was Mister Miracle. Brown was very impressed with Scott's skills (supplemented with various advanced technological devices he had taken from Apokolips). Scott befriended Brown's assistant, a dwarf named Oberon. When Thaddeus Brown was murdered, Scott Free assumed the heroic identity of Mister Miracle. Barda later followed Scott to Earth, and the two used their powers, equipment, and skills in the war against Darkseid. Eventually, Scott returned to Apokolips and won his freedom by legal means, through trial by combat.
Aided by magic-level technology and his own physical prowess, Scott Free/Mr. Miracle is an incredible escape-artist.
Posted by Chuck Wells at 7:15 AM