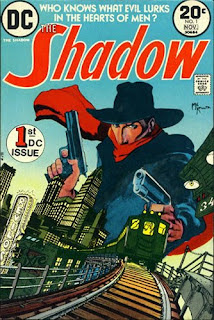 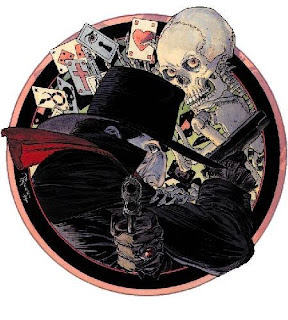 "Who knows what evil lurks in the hearts of men? The Shadow knows!"

The Shadow was created by Walter B. Gibson in 1931 with the first story entitled "The Living Shadow". One of the most famous of the pulp heroes of the 1930s and 1940s, The Shadow achieved even greater fame through a popular radio series where he was originally voiced by actor Orson Welles, The Shadow has been featured in comic books, television, and at least seven motion pictures. However, The Shadow is best regarded for its early radio years, in which pulp crime fiction received its most compelling broadcast interpretation.
The subject of this Flashback and the most acclaimed comic book depiction of the character was the 1970's The Shadow comic written by Denny O'Neil and drawn initially by Mike Kaluta (issues 1, 2, 3, 4 and 6), which was published by DC Comics. The O'Neal/Kaluta issues have been collected as The Private Files of The Shadow.
Moody, atmospheric and perfectly capturing the look and feel of the 1930's era, The Shadow was a high-water mark for 70's era comics. Issue 11, guest-starred another classic pulp-fiction character The Avenger (whose adventures also appeared from DC Comics for a brief period during the same decade).
Posted by Chuck Wells at 7:41 AM