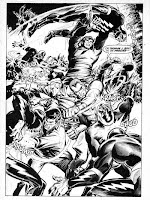 Doc Savage was a a popular action hero whose adventures where originally published in pulp-digest format back in the 1930's, but Marvel Comics (capitalizing on Bantam Books popular paperbacks that were reprinting The Man of Bronze's old stories for a new generation) published an 8-issue standard-size comic book series in 1972 that also basically adapted several of Doc Savage's pulp adventures.

However after that short-lived series was cancelled, and in the wake of the George Pal motion picture Doc Savage starring former TV Tarzan Ron Ely, Marvel tried Doc out again - this time in their innovative black & white magazine line. Doc Savage (Vol. 2) began in 1975 by writer Doug Moench and artist Tony DeZuniga; although artists John Buscema, Marie Severin, Val Mayerick and Ernie Chan contributed some work.
This series was truly a tour-de-force effort, featuring all-new Doc stories that were done with a pulp flavor, yet still retained a very modern sensibility.
Issue #1's The Doom on Thunder Isle was particularly poignant in its treatment of one secondary characters fate. Despite the quality of this larger format offering, Doc Savage magazine was also cancelled with its eighth issue, but it was a terrific run while it lasted.
Posted by Chuck Wells at 11:22 AM