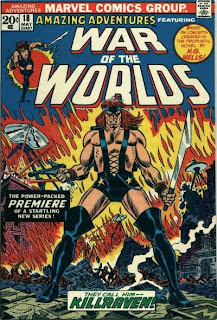 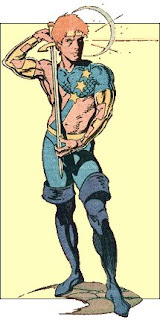 Killraven was first introduced in Marvel Comics "War of the Worlds" feature which ran in Amazing Adventures, starting with its 18th issue (May 1973), and continuing until the title ended [#39].

Writer Roy Thomas and artist Neal Adams created the first story (loosely based on H.G. Wells science-fiction classic), but others took over the book, with writer Don McGregor and artist P. Craig Russell handling more issues together than any other creative team.
Jonathan Raven, was an Earth man who was raised as a gladiator under Martian rule, and forced to fight against other humans for the Martians' amusement, under the name "Killraven". As punishment for trying to escape, he was handed over to a collaborating human-scientist named Whitman, for experimentation. Unknown to the Martians, Whitman was secretly working against his masters, and his "experiments" greatly enhanced Killraven's physical strength and endurance, and also gave him minor psychic powers to protect him from the Martians. After Killraven escaped for good, he dedicated himself to leading an active resistance and was quickly joined by a group of freedom fighters, who called themselves “The Freemen.”
Posted by Chuck Wells at 1:16 PM