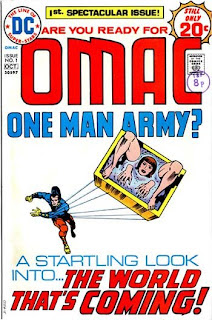 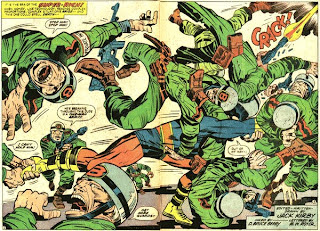 I promise that we will get back to some Marvel Flashbacks this very week, but first lets take a quick look at Jack Kirby's One Man Army Corps.

The series Omac (Sept./Oct. 1974) is set in the near future of "the world that's coming", OMAC himself is corporate nobody Buddy Blank who is changed by an A.I. satellite named Brother Eye into the super-powered OMAC.
OMAC works for the Global Peace Agency, a group of faceless people who police the entire world using pacifistic weapons. The world power balance is too dangerous for large armies, so OMAC is used as the muscle for the Global Peace Agency. OMAC only lasted for eight issues before being summarily cancelled prior to the story lines completion. The original character has appeared infrequently since then, but a revised version is currently utilized in the DC Universe.
Posted by Chuck Wells at 7:18 AM