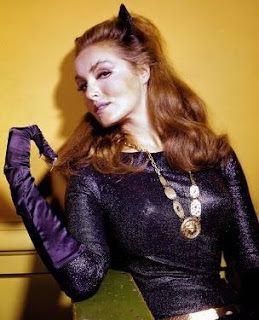 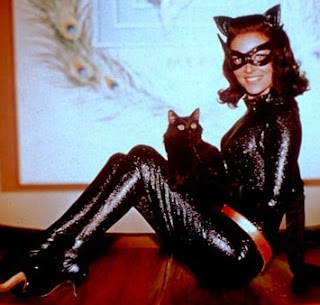 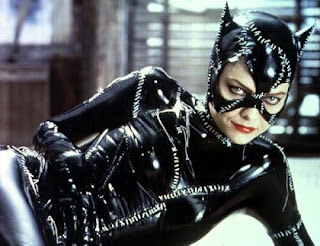 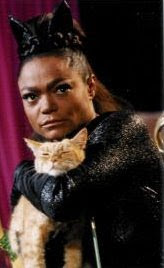 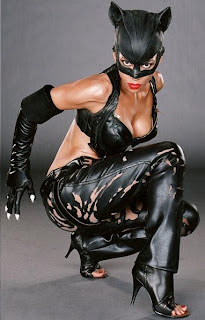 Julie Newmar! Lee Meriwether! Michelle Pfeiffer!
Um, Catwoman ... Catwoman ... Catwoman.
Oh, all right! Eartha Kitt! Catwoman.
Halle Berry starred in the motion picture Catwoman in 2004. That's absolutely the nicest thing that can be said about that film. In other words, if you can't say something nice - don't say anything at all.
Why Berry (aided by the films director) felt the need to pattern herself after Eartha Kitt is beyond me. Kitt made only three appearances as Catwoman during the third season of televisions Batman series in the 1960's, while Newmar was shooting the western McKenna's Gold, and visually Berry's Catwoman had much more in common with Pfeiffer's ragamuffin take on the character anyway.
Had Halle really wanted to channel another black super heroine [she also appeared as the mutant Storm in the X-Men movies], then why didn't she & the producers just option another DC Comics property: The Vixen? That character was similar to Catwoman in many respects, was african-american and even wears a similar hairstyle to the one sported by Berry in her own ultimately poor Catwoman feature. Beats the hell out of me!
By the way, neither Pfeiffer or Kitt really suit my tastes as Selina Kyle/Catwoman, and although former Miss America Meriwether was truly lovely (she only made as single appearance as Catwoman; in the 1966 film that starred TVs Dynamic Duo Adam West & Burt Ward), Julie Newmar owns the role ..... hands down.
No sexier feline has ever squeezed into the skin-tight costume of Catwoman than Ms. Newmar. Now if only American Movie Classics would stop showing Halle Berry's Catwoman all the damn time.

You are exactly right. Julie Newmar is the sexiest Catwoman ever and the only one that counts.

Lee, Michelle and Halle are all attractive women. And Eartha Mae can "purr" all she wants to about being a "sex kitten" (she looks more like an "alleycat" to me).

But Julie is the real deal.

ok, so you say why Berry would choose to "pattern herself after Eartha Kitt" is beyond you, and in the next breath you go right on ahead an assume that the reason is because they're both black. Then, to add insult to injury, you say that Berry should stick (or should have been forced to stick) to portraying other superheros who are "supposed" to be black. Racist much? Do you even understand how dumb what you're saying is? I guess not, so let me tell you: it's about as dumb as the film you're critiquing.

Oh, and guillermo, pure class on that out-of-left-field "alleycat" comment. I'm not even going to bother with that one.