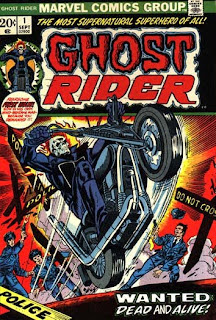 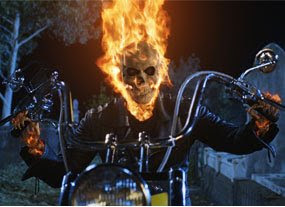 Johnny Blaze was a daredevil stunt-motorcyclist who spent his early years in the Quentin Carnival where his parents appeared in a stunt show with star Craig "Crash" Simpson.
Blaze’s mother abandoned the family when he was young and his father later died in a stunt, Johnny was then adopted by Crash and Mona Simpson. Crash soon became a father figure to Blaze, and upon learning of Crash's life-threatening cancer, Johnny despondently turned to the occult for answers. His arcane studies led him to a spell which supposedly could summon the devil himself, although Johnny was unaware that he had actually summoned the demon, Mephisto. Desperate to save his adoptive-father, Blaze sold his soul to Mephisto in return for Crash's cancer to be cured.
Crash Simpson's cancer was cured, but he was killed in a stunt-gone-bad; trying to jump over 22 cars. Mephisto was stymied in his attempt to claim Johnny’s soul, when Roxanne Simpson [Crash’s daughter] proclaimed her love for him. However, Blaze was unaware that Mephisto had bonded him with the demon Zarathos as an act of revenge for not being able to obtain Johnny's soul for himself. Johnny transformed into Ghost Rider, a leather-clad skeleton, his head cloaked in a sheath of flame, the night after Crash's death. While Johnny still had his soul, he was forced to punish the wicked upon Mephisto's demands whenever needed.
Blaze became a supernatural bounty hunter for Mephisto. Whenever he was in the presence of evil he would transform into the Ghost Rider, to exact the devil's revenge, returning the evil to Hell. Blaze was not completely lost in the transformation however, and would also help the innocent when they were in danger. His supernatural powers included; Super-human strength,invulnerability to heat and flame,an ability to project both regular and ethereal flames,the ability to travel between interdimensional realms and along any surface,he wields a magical chain & rides a flaming motorcycle, and he has a powerful "Penance Stare" which withers the souls of his victims.
Ghost Rider was made into a 2007 film starring Nicholas Cage as Johnny Blaze.
Posted by Chuck Wells at 8:06 AM