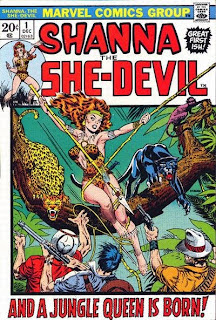 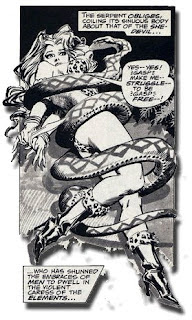 Shanna O'Hara was born in Africa to a diamond miner named Gerald O'Hara & his wife Patricia. She spent her childhood in the jungles of Zaire. When Shanna was six, her father accidentally killed her mother while hunting a rogue leopard. This traumatic incident led to Shanna's lifelong crusade against the use of firearms. Following her mothers death, Shanna moved to the United States and grew up to become an accomplished Olympic athlete, specializing in competitive swimming and track and field. She then became a licensed veterinarian.
Shanna began work as a zoologist and she raised many animals, including a female leopard named Julani, who was later killed by a zoo guard. This incident led Shanna to to take Julani's cubs, Ina and Biri, to the Dahomey Reserve in Africa.
Upon returning to Africa, Shanna became more attuned to nature, by patrolling the jungle and living freely in the wildlands. She began wearing nothing else but Julani's fur pelt, to help with the raising of the cubs. In the jungle, Shanna became more at home with herself and her native element, all the while protecting the Dahomey Reserve from poachers as Shanna the She-Devil.
[Inset panel by Tony DeZuniga.]
Next: A full week of Jack Kirby Flashbacks.
Posted by Chuck Wells at 8:12 AM