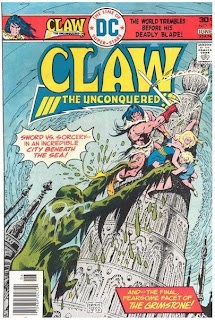 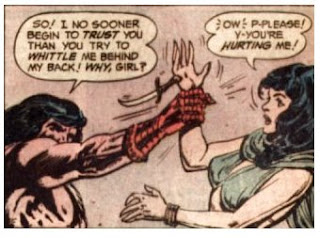 Claw first appeared in DC Comics Claw the Unconquered #1 (June 1975) as part of the "DC Explosion", a period when the publisher launched a record number of new titles onto the comic book market (16 new titles debuted in 1975).
After Marvel Comics found success in the "sword and sorcery" genre with their depiction of Robert E. Howard's Conan The Barbarian, DC released several fantasy-oriented series including Warlord, Stalker, Starfire, Nightmaster, Tor, Beowulf Dragon Slayer and Claw (which most closely resembled Conan in character and appearance).
Claw too, was a wandering barbarian in a prehistoric age who battled against rogue wizards, thieves, monsters and various warriors who crossed his path. However, as a result of a curse which had been placed upon his family, Claw possessed a deformed, claw-like right hand.
Published bimonthly through #9 (October, 1976), Claw the Unconquered was shelved for a time and then restarted with #10 (May 1978), however the relaunch of the series lasted for only three issues, and then it was suddenly cancelled with #12 (September 1978) as part of the infamous "DC Implosion", when their comics line was drastically scaled back. Two further issues of the series, which had been fully written and drawn, were later published in Cancelled Comics Cavalcade #1 in 1978 (only 35 copies of that comic were officially published). Claw was revived for a two part back up feature in Warlord #48-49 (August-September 1981) that tried to wrap up the barbarians story.
The entire series was written by David Michelinie, and Ernie Chan illustrated the series up to #7, with Keith Giffen taking over art duties with #8. With Giffen onboard, the series began to incorporate sci-fi elements, moving away from its’ purely sword and sorcery beginnings.

[Note: A joint DC/Wildstorm/Dynamite Claw the Unconquered regular monthly title by writer Chuck Dixon and penciller Andy Smith debuted in June 2006, but by December the new Claw series had run its course, ending with Claw enslaved by demons from hell,and the whole world doomed to demonic possession. This version series gave Claw's full name as "Valcan Scaramax.]
Posted by Chuck Wells at 10:03 AM