Comic Books Around the World: Philippines 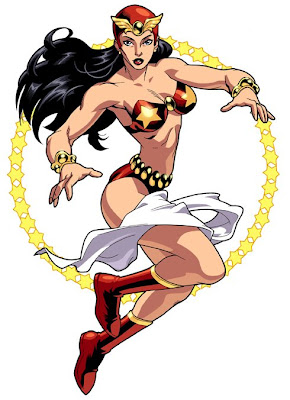 Darna was created by Filipino comics legend Mars Ravelo. In her more popular incarnations (the character has appeared in numerous movies and tv shows), she is an outer space warrior manifesting herself through a young girl from Earth, named Narda.
Darna was originally introduced as "Varga" in Bulaklak Magazine;Volume 4, #17, on July 23, 1947, but following creative differences with the editors of Bulaklak Magazine, Mars Ravelo changed the characters name to "Darna" and re-launched the book in 1950, with Nestor Redondo as artist. Darna later became a Philippine cultural icon.
Regardless of her many incarnations, the 1950's origin of Darna begins with a village girl named Narda who finds a small, white stone (actually a tiny meteorite from outer space). For some reason, Narda swallows the stone and then shouts "Darna!" - becoming a mighty warrior ready to defend Earth from evil forces.
Darna's powers include flight, super strength, super speed and near-invulnerability. The ruby encrusted in the winged medallion on her helmet also augments her abilities, allowing her to emit a powerful concussion blast and the medallions that make up her belt can be used like throwing stars (shuriken). Contrary to what some Filipinos may believe, Darna was not named after the magical Ibong Adarna (Adarna bird), which appears in a Philippine epic of the same name. In Bulaklak Magazine, though Narda was established as her mortal identity, "Darna" was simply an anagram of "Narda".
Darna's first adventure (as Darna) was serialized in the pages of Pilipino Komiks #77, where she was pitted against the sultry snake goddess Valentina. Here, the young girl Narda, swallowed the stone (which had the word Darna on it) and transformed into Darna by shouting out the latter name. Likewise, Darna can turn back into Narda by shouting her own name. The stone, which came from the planet Marte, remains in her body, and only her grandmother, and her brother Ding (who eventually becomes her sidekick) are aware of her secret.
Posted by Chuck Wells at 2:42 PM

Cool looking character and a neat feature! Where did you hear about her?

Thanks, Wayne. I don't remember where I first found out about Darna, but it was some time ago. There is quite a bit of info on her on the web, go check it out. I wish there were some English language translations of some of this material - and maybe there is - if so, I am not aware of it.

I am also gonna cover several other countries most popular characters, like Italy, France, Japan, etc.

My name is Raffy from the Official DARNA Website. For more information on DARNA, please visit:

The profile of the original DARNA from KOMIKS

or for her Classic Villains profile-

and lastly, to see the 'Modern Age' version of these Villains, check out the official site at-