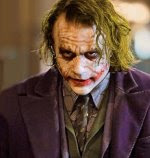 (AP) - The late Heath Ledger earned the supporting-actor Globe for his diabolical turn as the Joker in the Batman blockbuster "The Dark Knight." The Globe win boosts Ledger's prospects for the supporting-actor honor at the Oscars, whose nominations come out Jan. 22, the one-year anniversary of the actor's accidental death from a combination of prescription drugs.
The award was accepted by "The Dark Knight" director Christopher Nolan, who said he and his collaborators were buoyed by the enormous acclaim and acceptance the film and Ledger's performance have gained worldwide.
"All of us who worked with Heath on 'The Dark Knight' accept with an awful mixture of sadness but incredible pride," Nolan said. "After Heath passed, you saw a hole ripped in the future of cinema."
Only one actor has ever won a posthumous Oscar, best-actor recipient Peter Finch, for 1976's "Network."
Posted by Chuck Wells at 11:10 AM