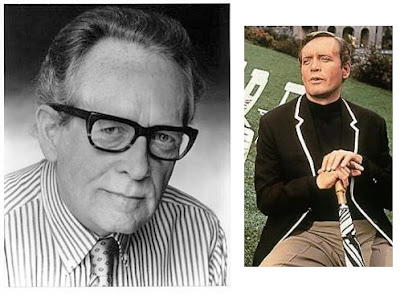 (AP) - Patrick McGoohan, an Emmy-winning actor who created and starred in the cult classic television show "The Prisoner," has died. He was 80.
McGoohan died Tuesday in Los Angeles after a short illness, his son-in-law, film producer Cleve Landsberg, said Wednesday.
McGoohan won two Emmy's for his work on the Peter Falk detective drama "Columbo," and more recently appeared as King Edward Longshanks in the 1995 Mel Gibson film "Braveheart."
But he was best known as the title character Number Six in "The Prisoner," a surreal 1960s British series in which a former spy is held captive in a small village and constantly tries to escape. A remake of "The Prisoner" starring Ian MKellen and Jim Caviezel is due out later this year on the AMC cable channel.
My personal favorite performance of McGoohan's was Doctor Syn in Disney's 1963 classic, "The Scarecrow of Romney Marsh". Condolences go out to his family, friends and fans.
Posted by Chuck Wells at 1:16 PM