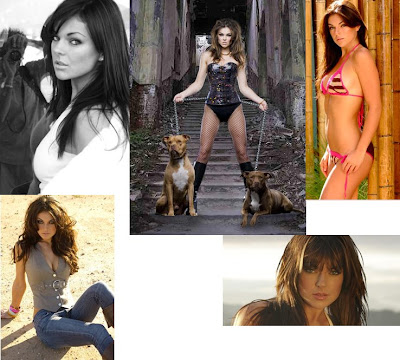 "You can do magic
You can have anything that you desire
Magic, and you know
Youre the one who can put out the fire"
- lyrics by America

It seems like every week my selection for "Gal" Friday is pushed to the side in favor of someone else who seemingly "pops" up out of nowhere, and this week proved to be no exception.
Canadian model & actress Serinda Swan has been cast in the role of Zatanna on the CW's "Smallville" series. In DC Comics, Zatanna is a long-time member of the Justice League of America who casts magical spells by speaking verbal commands backwards.
I really don't watch Smallville anymore, and I even managed to miss the recent Legion of Super-Heroes appearance there (and I'm a big fan of the Legion), but if these photos of Ms. Swan are any indication of her charms, then she will make a nice Zatanna.
Let's just keep our fingers crossed that they have her wear the fishnets. Oh boy!
Posted by Chuck Wells at 8:15 AM