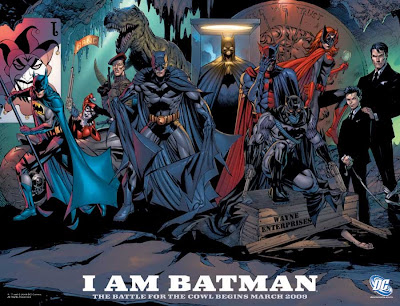 Knightfall was the title given to a major Batman story arc written by Chuck Dixon & others and originally published by DC Comics that dominated Batman-related comic books in the spring and summer of 1993. Knightfall was also the umbrella title to what became a trilogy of storylines that ran between 1993 to 1994. They consisted of "Knightfall", "Knightquest", and "KnightsEnd". The entire original Knightfall storyline took over a year to complete in the participating comic books.
Writer/Editor Dennis O'Neill, stated that part of the reason Knightfall was written was due to the popularity of more 'ruthless' heroes such as the Terminator and James Bond in films, and DC Comics publishers were starting to wonder if readers would prefer a Batman who was willing to kill his opponents; the subsequent response to Knightfall’s Jean Paul Valley/Batman proved that this was not the case.
Now, skip ahead to the present.
Batman RIP by Grant Morrison, pretty much rips-off the earlier Knightfall storyline, and is basically Knightfall Two, and adding insult to fan injury, the culmination of this drawn out rigmarole actually occurs in the crossover event series, “Final Crisis.”

Plus, the readers who fell for this scam, are now being prepped for another round of spin-the-bottle-storytelling with DC Comics next spiffy-idea-that-we-have-already-test-driven, Battle For The Cowl, which suggests that a slugfest among the Batman Family supporting cast is about to get underway to determine who is most qualified to replace the Dark Knight?

I don’t understand why this kind of stuff sells. I also have a very hard time accepting that the folks who craft stories like this, and the readers who support marketing campaigns that drive this mindset, actually like Batman.

This isn’t Batman folks.
Posted by Chuck Wells at 5:24 PM

So I read Final Crisis #6 today. I'm not sure why... Its like a bad movie you refuse to walk out on. This may be it, I may strictly buy back issues from now on.