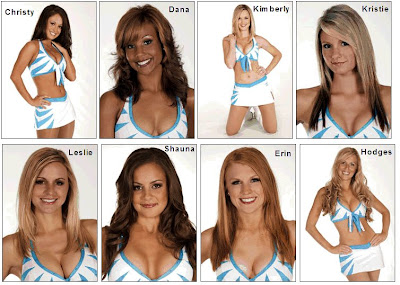 Once again this weekend eight NFL teams will play during the annual post-season divisional round to determine which of the survivors will square off for the two conference championship titles. Last weekend the Colts, the Falcons, the Vikings and the Dolphins were eliminated during the post-season "Wild Card" games. Basically that meant that the National Football League's Most Valuable Player 2008 (Peyton Manning/Colt's QB), the 2008 Associated Press Rookie of the Year (Matt Ryan/Falcon's QB) and the 2008 AP Comeback Player of the Year (Chad Pennington/Dolphin's QB) didn't really add up to additional play-off appearances. Yikes!
In honor of this weeks appearance by my "hometown" team, the Carolina Panthers (playing at home against the Arizona Cardinals in Charlotte, NC), and my usual "Gal" Friday post, here are eight of my favorite current Topcats (the official Carolina Panthers Cheerleaders squad).
Seven of these fetching young ladies are first year members of the squad, in fact of this group, only Kristie has been a Topcat for longer than the others, and she's only in her 2nd year (and already a co-Captain).
Go team!
Posted by Chuck Wells at 7:26 AM

Chuck - I was just googling pictures from my 2008 year as a TopCat and came across this post - so sweet to hear I was one of your favorites!!! That's awesome - so thanks!
xoxo Erin

Erin, thanks so much for stopping by, and just between the two of us, you're still one of my favorite TopCat's.