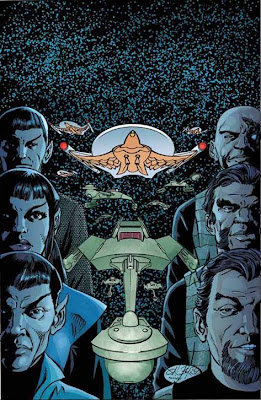 After a previous exposure to titles released by IDW Publishing failed to impress me, I was quite surprised to find one of their comics that I actually liked. Star Trek: Romulans, The Hollow Crown #1, is basically a one-man show by industry veteran John Byrne, who turns in an excellent job on this mini-series based on the classic Star Trek television series.

I am aware that Mr. Byrne has worked on other Trek-related books at IDW, but I'm uncertain whether this particular two-issue series directly continues storylines from one of them. The Hollow Crown does have its origins in the original Star Trek series episode, "Balance of Terror", in which Capt. Kirk and the crew of the Enterprise first battled against the Romulans along the Federation Neutral Zone, by taking up the plight of the family of the doomed Romulan Commander from that episode. When the mad Praetor of the Romulan Empire seeks someone to blame for the loss of his prized Bird of Prey, he focuses his ire on the family of the destroyed ships commanding officer. However, other forces are at work behind the scenes, and the crafty Praetor engages in a bit of esoteric political intrigue with a couple of familiar Klingon characters (also from the original Trek series) - - - but who is manipulating who?

John Byrne writes & illustrates ST:Romulans The Hollow Crown and both old school readers & today's audience will be drawn into his well-realized depictions of traditional Klingon & Romulan characters from classic Trek. The story is highly engaging, and the internecine actions going on within will likely prompt you into returning for the conclusion. Trust me on this, I hadn't really intended to see this one through (as this issue was given to me as a freebie), but after reading part one, I definitely wanted to see where things went from here.

It's too bad that Byrne remains such an incendiary figure to a large sector of the comic book fanbase. During the last few years he has produced some of his strongest pencils ever, in titles ranging from Blood of the Demon and The Doom Patrol (DC Comics), Marvel: The Next Generation and X-Men: The Hidden Years (Marvel Comics), to his own Next Men and Danger Unlimited at Dark Horse. He remains one of the few top established creators who have a sure command of traditional comic book form and structure. He repeatedly issues one diverse project after another that respects the character or property, but Byrne adds dimensions that may only have been suggested or hinted at, yet under his aegis seems integral to the environment that he has posited.

Byrne also remembers that comics are supposed to be fun. Star Trek: Romulans The Hollow Crown #1 delivers in spades. Recommended!
Posted by Chuck Wells at 7:11 AM

I agree that IDW seems to be hit or miss, the first Doctor Who series from them was crap, but I'm enjoying the current one. I'll have to check this one out.