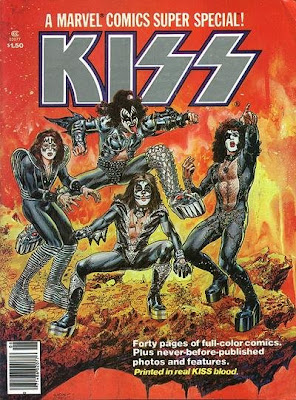 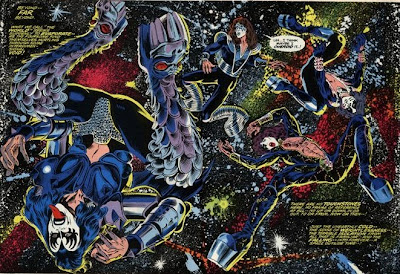 Marvel Comics Super Special was a magazine-sized, full-color series published by Marvel Comics starting in 1977. The first issue featured one of the 1970’s leading rock bands, Kiss, in an all-new, original adventure. In a strange marketing gimmick, the four band members (Paul Stanley, Ace Frehley, Gene Simmons & Peter Criss) actually mixed their blood into that issues printing ink.
Some early issues featured established Marvel titles (Conan the Barbarian) or in-house series which were not printed elsewhere (Warriors of the Shadow Realm, Star-Lord), but beginning with issue #14, the series continued with popular film adaptations (The Empire Strikes Back, Blade Runner, The Dark Crystal, etc.). These were often reprinted later without the bonus materials; as two to four issue mini-series by Marvel. The series was cancelled with issue #41 in 1985.
In a controversial move, Marvel Super Special #7, which featured an adaptation of Sgt Pepper's Lonely Hearts Club Band, was withdrawn by Marvel at the last minute, due to undisclosed reasons and all copies (if any were even printed) were destroyed prior to distribution. There were reportedly a few copies printed in foreign language territories such as France, the Netherlands and Germany, however no English language copies are known to exist, and even George Perez (who illustrated the comic) has stated that he has never seen a copy himself, and considers it to be "the rarest piece of George Perez printed artwork you can find". The next published issue (Battlestar Galactica) skipped ahead in the numbering to #8, despite #7 being cancelled and never published in the U.S.
Posted by Chuck Wells at 8:59 AM